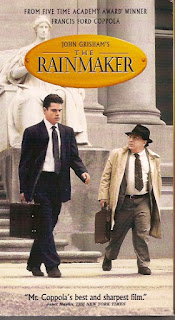 This would have been perfect for my salute to my legal-themed movies.
Synopsis: Young lawyer battles crooked insurance company on behalf of poor Southern family.. and he defends an attractive young lady fro her physically abusive husband…. And he discovers his boss is under investigation by the FBI… and he helps a lovely old lady develop better relations with her douchebag son…Holy crap, how many storylines does this movie involve?!?!
Blurb From the VHS Jacket: “Francis Ford Coppola directs and scripts an exciting, star-packed adaptation of John Grisham’s novel about an idealistic young attorney who takes on the case of a lifetime.”
What Did I Learn?: 1) Nothing is wrong with ethics. 2) Every lawyer, at least once in every case, feels himself crossing a line that he doesn’t mean to cross.”
You Might Like This Movie If: you figure it must be a highly *ahem* dramatic two-hour music video.
Really?: 1) That is one strange musical score. 2) I realize Rudy is a relatively young guy and he’s working a huge case more-or-less solo, but doesn’t he ever sleep? 3) Speaking of Rudy needing sleep, Kelly’s husband clearly injures him in their scuffle, and he’s awake pretty much the entire night she kills the guy. Funny how Rudy’s involvement in the incident never comes back to haunt him (it’s also funny how Deck routinely masquerades as a lawyer even though he’s flunked the bar exam six times and he never once gets caught - is that possible?) 4) Ok, it’s fairly obvious Bruiser (Mickey Rourke) is on the verge of getting indicted by the feds, but why would Rudy go into business with Deck, who isn’t a real lawyer, and the two of them have a grand total of $11,000 between them?
Rating: The Rainmaker is a good courtroom drama (very reminiscent of The Verdict) that tries a little too hard to be faithful to John Grisham’s novel of the same title. The result is an overly-long movie that’s loaded with interesting characters who come and go, and subplots that are never satisfactorily resolved. 7.5/10 stars.