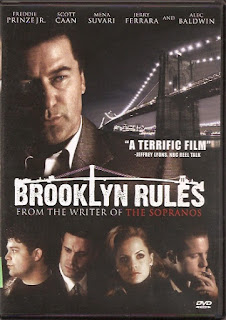 Synopsis: Budget Bronx Tale meets Budget Goodfellas meets Budget Saturday Night Fever meets Budget Diner.
Blurb From the DVD Jacket: “A gripping tale of three life-long friends struggling with relationships, responsibility and loyalty on the mean streets of 1980’s-era Brooklyn, NY.”
What Did I Learn?: 1) A grilled cheese sandwich is NOT the same thing as a cheese melt. 2) If you invent a better mousetrap in New York City, you’ll get a mousetrap stuck up your ass. 3) Dog Heaven is all cats, bones and fire hydrants.
You Might Like This Movie If: You figure it must be an hour-and-forty-minute Harry Ridlay music video.
Really?: 1) I can understand Carmine (Scott Caan) wanting to whack Gino as revenge for Bobby’s murder, but Michael (Freddie Prinze Jr.)? A college kid with no record of involvement with violence, or the local mafia? I had a hard time believing his first instinct wouldn’t be to tell the cops everything he knew. 2) So, Carmine and Michael murder Gino in cold blood, and… they both go on to live happily ever after? Neither of them feel pangs of guilt or remorse, and Gino’s buddies never visit either of them, looking for payback? That struck me as a little cold. 3) Gee…Mena Suvari isn’t given much to do in this movie, is she? And it’s funny how Alec Baldwin’s head takes up a quarter of the DVD jacket, and he has maybe 15-20 minutes of on-screen time.
Rating: I wanted to like Brooklyn Rules a little more than I did, as it’s a character-driven coming-of-age drama set amid the New York mob wars of the mid-1980s. Trouble is, Brooklyn Rules isn’t very original (see: “Synopsis”) and it could have been a much better picture with a polished script (much of the dialogue consists of the three buddies insulting each other, and it gets tiresome), a bit of recasting (Prinze’s Brooklyn accent is terrible, and he’s unconvincing as a tough guy who somehow “scammed” his way into Columbia University), and a stronger focus on Carmine’s character, the wannabe-gangster. That said, I liked Baldwin’s performance, and Jerry Ferrara’s (best remembered as Turtle on Entourage), final scene is surprisingly moving. 6.5/10 stars.