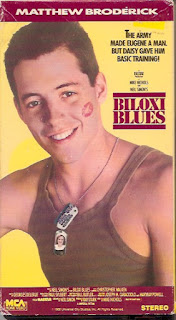 War Movie #2 (Please click the links to read my reviews of a few other Neil Simon movies: The Odd Couple, California Suite, I Ought to Be in Pictures, and The Out-of-Towners)
Synopsis: Raw recruits, including a budding writer, encounter a mean and sadistic drill sergeant during basic training….oh wait, that’s the Synopsis for Full Metal Jacket and Tigerland! Um… Grizzled combat veteran wins the grudging respect of the young men he’s required to train. No, that’s the Synopsis for Heartbreak Ridge. Um…Christopher Walken readies surly young punks for military activities…no, that’s the Synopsis for The Dogs of War. Um… Walken plays a menacing authority figure who isn’t afraid to wave a gun around. No, that’s King of New York. Ok, I give up….
Blurb From the VHS Jacket: “The Army made Eugene a man. But Daisy gave him basic training!”
What Did I Learn?: 1) There are no “bathrooms” in the Army. 2) There are 17, no… 52 acceptable sexual positions. 3) Once you start compromising your thoughts, you’re a candidate for mediocrity.
You Might Like This Movie If: You know it's hard to find a good meal in Biloxi, Mississippi, whether you're in basic training, or checking out a casino.
Really?: Hmm… the VHS jacket says Biloxi Blues takes place in 1943, yet the film itself opens with on-screen text which tells us the year is 1945. So, it’s the summer of ’45, and everybody keeps talking about being sent to fight the Germans, yet the war in Europe actually ended in May of that year. Amazingly, the boys even discuss the US invasion of the European continent as a “what if” scenario, even though D-Day took place in June, 1944. Did Neil Simon make this fairly obvious goof, or did Mike Nichols make a hash out of the original source material?
Rating: I’m not a big fan of Neil Simon, largely because most of his humour seems dated, and it consists of too many one-liners that aren’t terribly funny; in fact, Simon’s penchant for wisecracking nearly ruins a pivotal scene near the end between Broderick and Walken. Biloxi Blues is a nice, and somewhat charming little movie that doesn’t really go anywhere. Strangely, we don’t even see that much of Eugene’s girlfriend Daisy (Penelope Ann Miller does a wonderful job as the shy Southern belle), even though his relationship with her is supposed to be an important part of the story. Broderick handles the role of Simon’s alter-ego quite well, but I was most impressed with Walken’s portrayal of Sgt. Toomey: a soft-spoken, and surprisingly friendly drill instructor who knows how to command the respect of his troops without screaming at the top of his lungs. 6.5/10 stars.