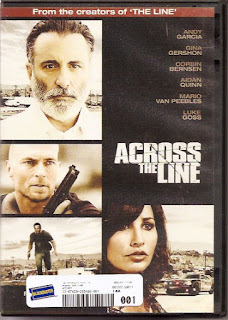 Synopsis: Fugitive financier foils feds, flees for freedom, finds foxy female, faces furious felons.
Blurb From the DVD Jacket: “When a fugitive-financier (Aidan Quinn) is discovered hiding out in Tijuana, he and his multi-billion dollar stash become prey to a Mexican drug lord, a Russian mobster, and the FBI.”
What Did I Learn?: Apparently, Russian gangster worth over $1 billion just love spending all of their time preparing food in a restaurant kitchen. Oh wait, I think I already learned that from Eastern Promises!
You Might Like This Movie If: You know it's a mistake to cross certain lines.
Really?: 1) See: “What Did I Learn?” 2) So, Corbin Bernsen has third billing on the DVD jacket, and he’s in this movie for what - five minutes as Agents Hobbs’ (Mario Van Peebles) hard-ass boss? Oh, and Gina Gershon also doesn’t have much of a part as the wife of a highly cerebral Mexican gangster (Andy Garcia). 3) Speaking of Garcia, I had a bit of trouble believing the top cartel boss in Tijuana would spend most of his time in a tiny cracker box personal office crammed with about a zillion books. 4) Holy shit, this movie ends in a literal Mexican stand-off of hired mercenaries, FBI agents, and Mexican cartel goons staring each other down, and then… they all holster their guns and go home? WTF?
Rating: For an action-thriller, Across the Line is surprisingly slow-moving, dull, and downright depressing. While I liked Quinn’s performance as the elusive Charlie Wright (Claudia Ferri is fantastic, incidentally, as the aging prostitute who helps him search for his long-lost daughter), Garcia looks like he’s sleepwalking for most of the picture. Acting aside, the most frustrating thing about Across the Line is that its basic story outline had a lot of promise, yet it never delivers very much. I cannot recommend this movie. 4.5/10 stars.
Would it Work For a Bad Movie Night?: No, but take a drink each time Andy Garcia says anything that's a real downer.