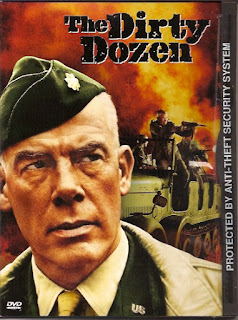 War Movie #1
Synopsis: A dozen quarrelsome gents must put their differences aside in order to prevent a hanging…. Oh wait, that’s the Synopsis for Twelve Angry Men. Um… Allied commandos dress up like German officers, and infiltrate a heavily-guarded chateau….oh, sorry - that’s Where Eagles Dare. Um… American prisoners take on the German army. No, that’s The Great Escape and Stalag 17.
Blurb From the DVD Jacket: “They are convicts, psychos, lunkheads, losers - and champs at the box office and in movie lore.”
What Did I Learn?: If you wish to impersonate a general, your best course of action is to “walk slow, act dumb and look stupid.”
You Might Like This Movie If: you really don't want to find a maggot inside a dirty dozen.
Really?: 1) I was more-or-less ok with this movie until the last 20 minutes, when the Dirty Dozen chase a bunch of German officers AND THEIR GIRLFRIENDS into a basement bunker, douse them with gasoline, and dump about two-dozen grenades inside. I’m pretty sure that qualifies as a war crime, as does Reisman’s comment regarding captured prisoners: “free the French and shoot the Germans.” 2) Telly Savalas as a Southern good old boy named Maggot…ok, sure. 3) I realize Colonel Breed (Robert Ryan) is disobeying orders when he enters the Dirty Dozen’s compound and harasses Reisman’s (Lee Marvin) men, but could a Major really get away with firing machine gun bullets at a superior officer, and then encouraging his men to beat up the Colonel’s troops? 4) Hold on… this mission has to happen for the D-Day landings to succeed properly, so the US military brass assigns it to a bunch of anti-social convicts who absolutely cannot be trusted? Why not send in a real commando unit?
Rating: I hadn’t seen The Dirty Dozen since the late 1980s, so I was unprepared for its overall ugliness (Marvin himself hated this movie, and did it strictly for the paycheque; Charles Bronson actually walked out during a screening). The plot is absurd (see: “Really?”), and 150 minutes is far too long for an action-adventure, but it more-or-less works as a war thriller until the third act.  If I hadn’t seen the despicable last 20-30 minutes of this picture, I might have compared it to another revisionist WWII film from the 1960s, Kelly’s Heroes, and given it six stars. Unfortunately, I cannot recommend this movie. 4/10 stars.
Would It Work For a Bad Movie Night?: Sure - take a drink every time Lee Marvin mouths off at a superior officer and somehow gets away with it.