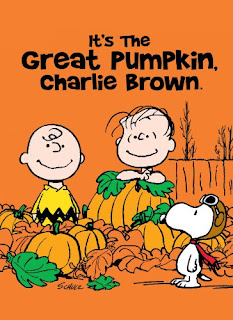 Happy Halloween! Please click the link to read my review of A Charlie Brown Christmas.
Synopsis: It’s like Waiting for Godot, starring obnoxious children and a highly imaginative dog.
Blurb From the VHS Jacket: “The Peanuts gang celebrates Halloween while Linus waits for the Great Pumpkin.” [Taken from imdb.com]
What Did I Learn?: 1) Never jump into a pile of leaves with a wet sucker. 2) The Great Pumpkin values sincerity. 3) The fury of a woman scorned is nothing compared to the fury of a woman who has been cheated out of “tricks or treats.”
You Might Like This Movie If: Just like Linus van Pelt, you've always wanted to see a pumpkin fly through the air.
Really?: 1) So, where exactly does Linus write his letter to the Great Pumpkin? Why is he suddenly accosted by a parade of verbally abusive Peanuts characters? 2) Wait, Linus spends Halloween night in a pumpkin patch, and it’s up to Lucy to bring him home at 4AM? I’m curious: do these children actually have any parents?
Rating: I realize It’s the Great Pumpkin Charlie Brown is widely considered to be a Halloween classic, and it was created as a children’s special, but something about it rubbed me the wrong way. The story itself is inane and pointless - the Great Pumpkin never shows up (Linus, of course, refuses to learn a thing from the experience, so the end credits consist of him shouting at his best friend like a crazed zealot), the comic strip humour doesn't translate well into an animated special, and it’s difficult to listen to gratuitously nasty children shriek insults at Linus and Charlie Brown for 22 minutes. That said, I liked the vignette of Snoopy pretending to be a WWI flying ace (it's the one part that doesn’t include screaming kids), and I loved Vince Guaraldi’s smooth jazz musical score. Unfortunately, I cannot recommend this movie. 4/10 stars.
Would it Work For a Bad Movie Night?: Sure - take a drink anytime somebody uses the word “blockhead.”