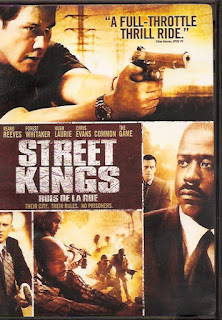 Synopsis: Keanu Reeves plays America’s dumbest bad cop.
Blurb From the DVD Jacket: “Gripping performance by Keanu Reeves, ACADEMY AWARD Winner Forest Whitaker and an all-star supporting cast power this action-packed crime thriller.”
What Did I Learn?: When you really want a bowl of cereal, beer is apparently an acceptable substitute for milk.
You Might Like This Movie If: you've always wanted to be known as King of the Street.
Really?: 1) So, Ludlow’s (Reeves) big strategy to find the kidnapped girl is to offer to sell guns to her kidnappers, provoke them into beating him senseless with a few racial slurs, hope they steal his traceable car, and then sneak up on them in the middle of the night? Gee, what could possibly go wrong? 2) Hold on - Ludlow has Wander handcuffed to a railing, there’s about a zillion dollars in cash now completely visible behind a ripped-out wall in Wander’s house, and instead of calling Internal Affairs, he executes him in cold blood? And Captain Biggs (Hugh Laurie) is somehow ok with that? 3) Ok, I realize Wander’s henchmen are really bad guys, but what’s with all the rapity-rape? Why do all of them feel the need to rape not only Ludlow’s girlfriend, but Washington’s widow as well? That struck me as far too over-the-top. 4) I have a problem with the basic premise of this film: Ludlow has consistently broken the law by acting as a vigilante cop for Captain Wander, yet he knows nothing about the illegal activities of his fellow officers, and nobody thinks to cut him in for some of the money in the “cookie jar.” (See: “Synopsis”). 5) Wait, Ludlow and Washington (Terry Crews) somehow blazed a new trail by in the early 1990s as black-and-white officers working together in a black-and-white police cruiser? Gee, that seems a little far-fetched.
Rating: Laurie and Whitaker deliver strong performances as antagonistic LAPD captains, but Street Kings is otherwise a forgettable, distasteful, and strangely implausible (see: Really?) police corruption film that’s marred by an unlikeable protagonist and some pretty brutal violence. Check it out only if you have nothing better to do, and it’s free to watch. 5.5/10 stars.