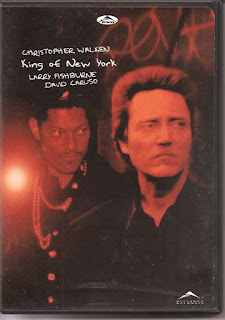 Hey, this would have been perfect for my salutes to movies about gangsters and dirty cops.
Synopsis: Do you remember Christopher Walken’s cerebral mob boss character from Suicide Kings and True Romance? Well, just imagine he gets out of jail, whacks a whole bunch of rival drug dealers, dances to Schooly-D, bangs beautiful women on the subway(!) and muses about providing free health care in the South Bronx before he runs afoul of the local constabulary.
Blurb From the DVD Jacket: "In New York, crime gets done Frank's way - or it doesn't get done at all."
What Did I Learn?: 1) Jimmy Jump (Lawrence Fishburne) really likes root beer. 2) America spent $100 million in 1990 on getting high, and none of it was Frank White’s fault. 3) Frank White (Walken) never killed anyone who didn’t deserve it.
You Might Like This Movie If: you don't take any crap from fast-food employees.
Really?: 1) So, Frank runs a criminal organization that’s almost entirely African-American in personnel. Could that happen in real life? While I liked the strong friendship between Frank and Jimmy, I had a hard time believing these guys would have anything to do with one other, let alone be best buddies and jointly oversee New York City’s biggest narcotics enterprise. How did they meet? I think somebody should have provided some back story. 2) Was Arty Clay some sort of a mafia captain? If so, wouldn’t killing him generate a whole lot of counter-productive heat, or does Frank give the mob a cut of his action? Come to think of it, wouldn’t a successful drug dealer pay off the cops? Couldn’t he call in a favour or two when Gilley and Flanigan (David Caruso and Wesley Snipes) start harassing him? 3) Gilley and Flanigan's assault on Frank White's lair winds up killing several cops. Wouldn't Internal Affairs ask a whole bunch of less-than-friendly questions to the surviving members of the team?
Rating: King of New York is a flawed crime thriller that I can’t bring myself to dislike. Sure, the plot is thin and a little implausible (see: “Synopsis,” and “Really?”), and it’s tough to care very much about either Frank or his antagonists, but the film does a wonderful job of presenting the look and feel of late-1980s New York City, the cinematography is innovative and interesting, and it features several exciting action sequences and a highly unique cast. Moreover, Caruso and Snipes deliver great performances as the strangely sympathetic rogue cops, while Fishburne steals every scene he’s in as the soda-loving Jimmy Jump. 7.5/10 stars.