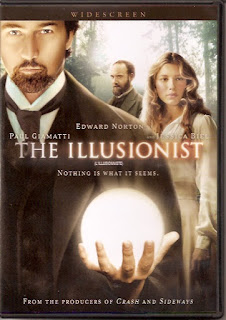 Synopsis: Victorian age illusionist seeks revenge after the death of his beloved….oh, sorry - that’s the Synopsis for The Prestige. Ok, um…. Gifted artist runs afoul of closed-minded authorities in Habsburg-ruled Vienna…. No, that’s the Synopsis for Amadeus.
Blurb From the DVD Jacket: “Unlock the mysteries of the year’s most spellbinding film from the producers of Crash and Sideways!”
What Did I Learn?: Life and Death. Space and Time. Fate and Chance. These are the forces of the universe!
You Might Like This Movie If: You know it isn't easy to pull off a convincing illusion.
Really?: 1) So, wait…how much time has elapsed between Sophie’s (Jessica Biel) murder and Uhl’s (Paul Giamatti) investigation of the stables….a few weeks? I have to think that stall would have been cleaned at least once, meaning he wouldn't find any evidence of foul play. 2) Um...how many people in Vienna know about Prince Leopold’s upcoming coup against his father's regime? It seems to be fairly common knowledge amongst the characters. 3) Maybe I’m being nit-picky, but I sort-of expect a film that delves into the world of stage magic to do a better job of explaining how the protagonist accomplishes his visual tricks. 4) Ok, I realize Prince Leopold is a pretty awful person, but I’m not sure how I feel about the two leads framing him for murder and driving him to suicide. Something about that rubbed me the wrong way.
Rating: The Illusionist is an interesting companion film for The Prestige, as they share a number of similarities, but it isn’t quite in the same league. Overall, it's not a bad film. The Illusionist is highly imaginative and mesmerizing in places, and it features excellent supporting performances from Giamatti and Biel, but it’s a little too slow-moving and humourless for my taste, Prince Leopold is far too simplistically evil to be an interesting villain, and the “twist” ending isn’t that difficult to figure out ahead of time. I also have to remove half a star for the film’s unnecessary and distracting use of CGI special effects. 7/10 stars.