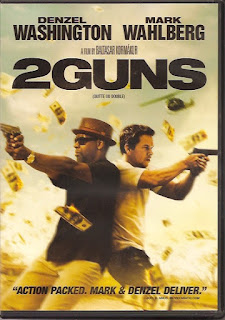 Synopsis: Academy Award winner Denzel Washington mugs his way through forgettable, half-baked shoot-em-up for $20 million payoff.
Blurb From the DVD Jacket: “Academy Award winner Denzel Washington and Mark Wahlberg lead an all-star cast in the explosive hit 2 Guns.”
What Did I Learn?: 1) Never rob a bank across from a diner with the best donuts in three counties. 2) Nobody’s innocent. There’s just the guilty, the ignorant, and the unlucky. 3) When the hand has gangrene, you chop it off to save the body. You don't keep the pinkie around just because it "meant well". 4) Blind loyalty is not loyalty. 5) Just because you put your finger in your belly button and brown shit comes out don't mean it's your asshole. [I’m still trying to figure that one out]
You Might Like This Movie If: You really want to see people get excited over $43 million.
Really?: 1) So, the CIA shakes down Mexican drug cartels and then stuffs the loot away in the safety deposit boxes of tiny border town banks with minimal security? That doesn’t compute. 2) I realize DEA Agent Bobby wants to bust Stig (Wahlberg), but can he seriously participate in arson and bank robbery in order to do so? 3) Gee….it’s kind of hard to sympathize with Stig after he shoots the heads off several chickens in order to impress some cartel thugs. 4) Let’s see… a bunch of well-armed Naval intelligence goons decide to rip off the CIA, which is already ripping off the drug cartels. Wouldn’t the CIA get wind of this? How many sets of villains does this movie need? 5) I have to ask: could Bobby seriously pack $43 million in cash into his car, and drive it across the border into Mexico without it getting impounded by either the US or Mexican border officers? 6) Wait, the big Bobby agrees to deliver the $43 million because the CIA has framed him for the murder of his boss and he wants to clear his name. Is he now a wanted man?
Rating: Washington and Wahlberg share some enjoyable (and genuinely funny) buddy chemistry as a couple of star-crossed undercover federal agents who don’t really like one another, but 2Guns is otherwise a borderline bad movie with sub-par dialogue, a convoluted, formulaic and confused plot that doesn’t make a lot of sense, and some very hit-or-miss humour. (See: “Synopsis,” “What Did I Learn?” and “Really?”) Still, 2Guns never takes itself too seriously, and it's fine for an evening's entertainment if there's nothing better on television, so I’ll give it a barely-passing grade. 5.5/10 stars.