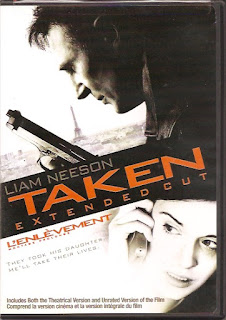 Synopsis: Special Forces killing machine shoots countless number of scumbags in order to rescue teenaged girl abducted by foreign gangsters. Wait, wasn’t that the Synopsis for Spartan? I mean, exactly… pretty much word-for-word?
Blurb From the DVD Jacket: “Prepare to get Taken for the ride of your life!”
What Did I Learn?: 1) France has a very reliable power system, which is great if you’re planning on zapping somebody with a whole lot of electricity in order to obtain information. 2) Paris is a crime-and-drug-ridden hellhole, and best avoided altogether.
You Might Like This Movie If: You know there are a lot of creepy perverts lurking around in Paris.
Really?: 1) So, Bryan’s (Liam Neeson) daughter only has 96 hours before something terrible happens. Gee, that certainly spices things up, doesn’t it? Why 96 hours? Where did that number come from? 2) Gee… Famke Janssen doesn’t have much of a part as Bryan’s shrewish ex-wife, does she? I’m mean, she’s gratuitously nasty to the guy, undermines him in front of his daughter, and then pretty much exits the movie after Kim is kidnapped. I guess she needed the dough. 3) I have to wonder: do private clubs like the one depicted in this film actually exist? Wouldn’t their members be prime candidates for blackmailing schemes? 4) Funny how Bryan feels fine after he wakes up after getting conked on the head. Aren't concussions rather serious medical emergencies?
Rating: Taken isn’t particularly clever or original (see: “Synopsis”), but it works well as a compelling, and genuinely disturbing action-thriller if you don’t ask too many questions about its rather absurd premise: one ex-super agent single-handedly wipes out the entire Albanian mafia in Paris, and somehow manages to always stay one step ahead of the cops. The film also owes a lot to Neeson for bringing depth and substance to a role that could have been completely one-dimensional. 7.5/10 stars.