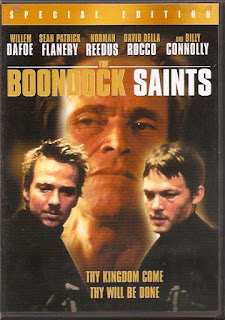 Dang - I probably should have saved this for St. Patrick’s Day!
Synopsis: Multilingual Irish meatpackers team up with cat-killing idiot to rid Boston of its least-competent gangsters.
Blurb From the DVD Jacket: “FBI agent Paul Smecker (Willem Dafoe) is on the trail of two vigilante brothers (Sean Patrick Flanery and Norman Reedus) whose spiritual sense of justice has turned Boston’s streets red with blood.”
What Did I Learn?: 1) People in glass houses sink sh-sh-ships. 2) Charles Bronson always uses rope in his movies, and it’s useful to have some when you decide to go on a killing spree. 3) That James Bond shit never happens in real life - professionals don’t do that! 4) Willem Dafoe does NOT look good in drag.
You Might Like This Movie If: You really want to humiliate a smug work colleague.
Really?: 1) So, a couple of working-class Irish guys from Boston are fluent in Russian, French, German, Spanish and Italian? Well, that’s convenient. 2) Funny how both Il Duce (Billy Connolly playing against type) and the Saints are all skilled sharpshooters, yet nobody gets hit during their big gun battle.
Rating: The Boondock Saints is a darkly comic thriller about a couple of Irish-American brothers who become vigilantes, and the brilliant-but-seriously weird FBI agent (Dafoe, in a performance that pretty much steals the show) who pursues them. On the whole, it's a good film with a funny and compelling script that also takes itself a bit too seriously near the end. 8/10 stars