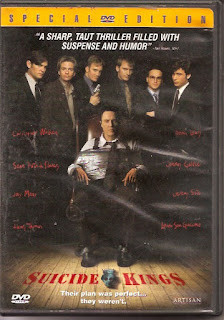 Synopsis: Basically, the pretentious-but-vaguely-defined goofballs from Kicking and Screaming kidnap a slightly-nicer version of the villain from True Romance.
Blurb From the DVD Jacket: “Avery is desperate: his sister has been kidnapped and ransomed for $2,000,000, and his father doesn’t have the cash. So Avery and his buddies concoct a bold, semi-suicidal scheme: abduct retired mob boss Charlie Bartolucci (Christopher Walked), hide out in their uptight friend Ira’s house while his folks are out of town, and force Bartolucci to use his contacts to find the girl.”
What Did I Learn?: Everybody lies. Cops lie; newspapers lie; parents lie; the one thing you can count on is the word on the street.
You Might Like This Movie If: You know that if you insist upon wearing $1500 stingray boots, you might receive a bit of good-natured ribbing from friends and colleagues.
Really?: 1) Ok, I realize the guys are desperate to get Jennifer back from the kidnappers, but how can they be sure Charlie’s people can actually find these people, and what do they think is going to happen after they let him go with a severed finger? 2) So, a big-time ex-mob boss gets into a car with a bunch of strange young men without even informing his bodyguard? That seems a bit implausible.
Rating: Suicide Kings is a little contrived (see: "Really?"), but it’s a suspenseful, and occasionally funny psychodrama with an unusual cast and a fine performance from Walken. It’s a pleasure to watch Charlie terrify-and-manipulate his captors, even though he’s taped to a chair and slowly bleeding to death, and I especially loved the scenes when he torments (and later befriends) whiny-and-neurotic Ira (Johnny Galecki). 8/10 stars.