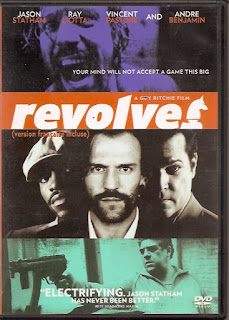 Dang - I should have used this for my tribute to British Gangster Movies.
Synopsis: Guy Ritchie set out to create something akin to The Usual Suspects meets Waking Life; instead, he made another Rancid Aluminum with a whole lot of psychobabble.
Blurb From the DVD Jacket: “REVOLVER is populated with Guy Ritchie’s (Snatch; Lock, Stock and Two Smoking Barrels) classic breed of fast-talking, sharp-suited gangsters but with a psychological twist that your mind may not be able to handle.” [Ooh, that’s clever - if you don’t like this movie, it’s your fault because you can’t “handle” it.]
What Did I Learn?: Apparently, your ego isn’t really you, and you shouldn’t listen to what it has to say.
You Might Like This Movie If: See: "What Did I Learn."
Really?: 1) See: “What Did I Learn?” [WTF?] 2) Funny how Jake spent years in prison sandwiched between a con man and a chess grandmaster, and fate somehow throws him together with Zach (Vincent Pastore) and Avi (André Benjamin), and he never seems to put two and two together. 3) How exactly did Zach and Avi fake Jake’s illness, and fudge the medical records? 4) So, wait - Zach and Avi offer Jake protection from Macha in exchange for all of his money. Why would he take the offer, knowing full well that he’s dying, anyway? This doesn’t make any sense. 5) Ok, did Zach and Avi brainwash Jake when they were all in jail, or did they just encourage him to listen to his inner voice (which isn’t really him)? And is Jake really “Sam Gold”, or does Sam Gold live in the heads of every would-be big-time criminal? And if that’s the case, who are the attractive female hench-ladies who claim to work for Gold? 6) I realize Sorter (Mark Strong), the cold-as-ice hitman, doesn’t want to murder a little girl, but up until his big face-turn, the viewer isn’t given any indications that he might have second thoughts about murdering people in cold blood. It’s very unconvincing. 7) I give up.
Rating: I quite enjoyed Guy Ritchie’s earlier films, so when I sat down to watch Revolver, I was unprepared for the convoluted, pretentious, and nonsensical mess that awaited me (See: "Synopsis," "What Did I Learn?" and "Really?") The movie starts out well - Jake Green (Jason Stratham) is released from prison, and wants some payback from oddly-named gangster Dorothy Macha (Ray Liotta), but the script quickly veers off into a number of bizarre directions, and it’s clear that Ritchie was in way over his head when he tried to inject thought-provoking, esoteric ideas into the world of Cockney gangsters. I cannot recommend this movie. 2/10 stars.
Would it Work For a Bad Movie Night?: Absolutely! Take a drink any time Ray Liotta screams hysterically, or somebody in the film says something “clever” along the lines of: “greed is the only snake that cannot be charmed,” or “The greatest enemy will hide in the last place you will ever look.”