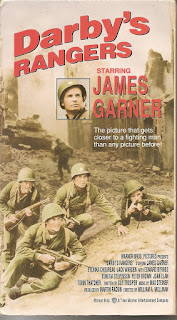 Synopsis: It’s basically two hours of combat training set to an endless repetition of “You’re In the Army Now” that’s occasionally interrupted with some of the most unconvincing love scenes ever filmed.

What Did I Learn?: Apparently, American Jews will make a sign of the cross when they hear upsetting news. [Who wrote this movie?]
You Might Like This Movie If: You can’t get enough of “You’re in the Army Now.”

Really?: 1) See: “What Did I Learn?” 2) Ok, those are NOT English, Scottish and Italian accents. Holy shit, who cast the actors in this movie? 3) So, what’s the deal with the slapstick barroom brawl scenes? Did some movie studio hotshot decide this film needed a bit of levity?

Rating: Garner and Jack Warden do their best with a sub-standard script, but even Garner’s inherent likability can’t salvage one of the most incompetently-directed (and written) films I’ve ever watched (See: “What Did I Learn?”, “Synopsis” and “Really?”).  The action scenes aren’t exciting, the love scenes are treacly and unwatchable, and by the end I simply didn’t care about these characters. I cannot recommend this movie. 3/10 stars.

Would It Work For a Bad Movie Night?: Maybe. Take a drink every time an English, Scottish or Italian woman instantly falls in love with one of the Rangers.