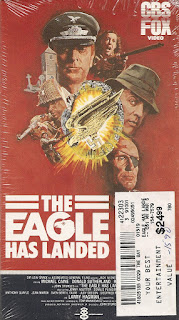 Blurb From the VHS Jacket: “'Get Winston Churchill.' That’s the order given to sixteen German paratroopers who – disguised as Free-Polish soliders – will drop down over the Norfolk coast in England, snatch the visiting leader, and bring him back to Hitler.”

What Did I Learn?: WWII-era Soviet cigarettes were horrible, and yet strangely addictive.

You Might Like This Movie If: You figure it must be 131 minutes with this guy.
Really?: 1) Steiner (Michael Caine) and his men insist upon wearing their German uniforms underneath their disguises. Um....wouldn’t that eventually get a bit hot and uncomfortable, and look rather bulky? 2) So wait – Molly barely knows Liam (Donald Sutherland), and yet when she discovers he’s an enemy agent, she actually kills somebody in order to keep his secret? I’m not buying that one. 3) What was the point of including Larry Hagman’s incompetent Colonel Pitts character? He simply doesn’t fit the rest of the movie’s tone. 4) Hold on – the film establishes that Steiner and his men are basically honourable soldiers, and the movie is presented from their point of view right up until the point when they take control of the town. Suddenly, there's a narrative shift, and Captain Clark (Treat Williams) becomes the hero. Who is the audience supposed to root for, exactly?

Rating: Directed by the legendary John Sturges (who at this final stage in his career was only interested in earning some fast bucks), The Eagle Has Landed is a highly entertaining, but deeply flawed thriller that starts to fall apart in the second act. 6.5/10 stars.