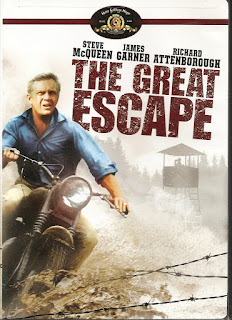 War Movie #2 (Please click the links to read my reviews of a few other WWII POW movies: Stalag 17, The Bridge on the River Kwai, and The Great Raid)

Blurb From the DVD Jacket: “In 1943, the Germans opened Stalag Luft III, a maximum security prisoner-of-war camp designed to hold even the craftiest escape artists.”

What Did I Learn?: If you ever bust out of a POW camp and find yourself alone in an enemy country, here’s some free advice: don’t ride on public transportation, stay out of urban centres, and just keep walking.

You Might Like This Movie If: You're in the mood to watch some great escapes.
Really?: 1) Funny how the prisoners are all captured airmen, yet nobody ever discusses flying, except in passing. 2) So, it took the prisoners what – a year to dig those tunnels and get the papers and other materials in order, and it’s somehow always summertime in the camp? 3) I realize The Great Escape is based upon a true story, so perhaps I shouldn’t throw that many darts, but I’m shocked that: a) the Germans never put the prisoners to work, so they had plenty of time and energy to dig those tunnels, and b) the Germans would allow the entire camp to get rip-roaring drunk on the Fourth of July. That’s just asking for trouble. 4) So, Hilts (Steve McQueen) keeps busting out of the prison camp, and each time after he’s re-captured, the German guards allow him to take his ball-and-glove into the Cooler. That’s awfully nice of them.

Rating: Based upon a true story (although highly embellished for dramatic effect, especially the parts involving Steve McQueen tearing across Southern Germany in a 1960s-era British motorcycle), The Great Escape is a suspenseful, and quite enjoyable war drama. I liked James Garner's portrayal as the sneaky-yet-likeable "scrounger", yet at 172 minutes the film is far too long, and the first couple of hours should have focused a lot more energy on character development. A number of actors, such as James Coburn, Nigel Stock, and James Donald, aren't given much to do, which is a shame. 8/10 stars.