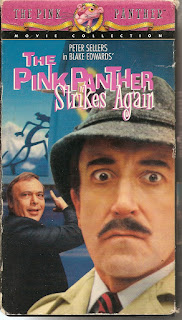 
Blurb From the VHS Jacket: “Finally driven over the brink by his maddeningly incompetent underling, Inspector Dreyfus commandeers a doomsday device and threatens global destruction. His only demand? He wants Clouseau exterminated.”

What Did I Learn?: If you're scheduled to meet with a board of psychiatrists to determine if you're sane enough to leave a mental facility, it's a very good idea to keep your cool.


Really?: 1) Hmm...strange how this movie is titled The Pink Panther Strikes Again, yet the Pink Panther diamond has absolutely nothing to do with the story. 2) Ok, given the circumstances, I'm sure the world's major countries would attempt to assassinate Clouseau as a means of appeasing Dreyfus, but wouldn't they also track down the whereabouts of the madman? Isn't it a little implausible that Clouseau - the world's worst detective - is the only guy who thinks of checking out that mysterious Bavarian castle? Come to think of it, why does Tournier (the bank robber) dress up as Clouseau, and visit his hotel when he knows the world's greatest killers are gunning for him? 3) Wow, Olga (Lesley Anne-Down) is a trained Soviet assassin who falls in love with Clouseau, and yet her part becomes negligible after she's introduced mid-way through the film.


Rating: The Pink Panther Strikes Again has a few problems in terms of pacing (it really tends to drag in places, such as when Clouseau is in England, or right after the botched Oktoberfest assassination attempts), but it features a number of genuinely funny scenes, and Herbert Lom is magnificent as the protagonist's long-suffering boss. He steals the movie. 8/10 stars.