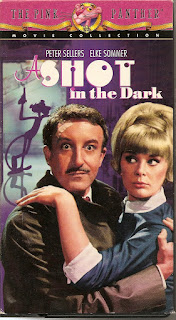 
Blurb From the VHS Jacket: “The French have a word for man like Clouseau: idiot!”

What Did I Learn?: If you want to smoke out the murderer in one of those Agatha Christie-style drawing room murder-mysteries, your best course of action is to loudly announce: "I know who killed [fill in the blank]!", and arrange to have the power cut immediately afterward.


You Might Like This Movie If: You've always wanted to host an evening of delicious food...and murder!!


Really?: 1) Hey, didn't Clouseau have a wife in the original movie, which was released a mere three months earlier? I realize she ran off with Charles Litton, but shouldn't the script have mentioned this, at least in passing? 2) Wait - Clouseau clearly states he's a police officer on official business, and the nudist colony guy still insists he has to disrobe? That doesn't make any sense. 3) So, do the French police really send street vendors to jail if they aren't carrying their official licenses? And I could understand Clouseau getting arrested the first time he forgets his badge, but three or four times? Come on....


Rating: A Shot in the Dark is a charming little comedy and an interesting companion movie to the original Pink Panther. Fans of the later movies may find it a little more to their liking, as Cato and Chief Inspector Dreyfus make their first appearances (although this is the only film in the series that doesn't feature the Pink Panther theme music, or use "Pink Panther" in its title), and Clouseau is clearly the protagonist. Still, A Shot in the Dark sometimes feels a little stagy, in part because it was adapted from a play. Oh, and I don't think the audience needed to hear "In the Shadows of Paris" in its entirety. 7/10 stars.