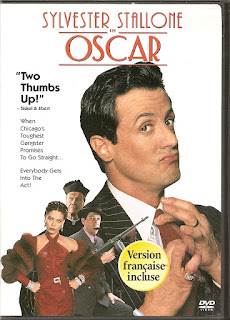 Blurb From the DVD Jacket: “Hollywood superstar Sylvester Stallone teams up with comedy director John Landis (Animal House, Trading Places, and Coming to America), and the results are hilarious!”

What Did I Learn?: 1) Never witness nuthin’ – you live longer. 2) A father may misunderstand if you inform him of his daughter’s “well-rounded diphthongs.”

You Might Like This Movie If: You'll watch anything that involves a bad guy....and somebody named Oscar.


Really?: Oscar is a screwball comedy with a lot of surprising moments, and it really isn’t meant to be taken all that seriously. Still, I had a hard time believing Anthony wouldn’t have eventually found out on his own that Theresa isn’t Snaps’ daughter.

Rating: If you’re in the mood for some silly and absurdist humour, Oscar is fine for an evening’s entertainment. This movie fell down the collective memory hole shortly after it was released, in part because it was soon followed by Stallone’s atrocious Stop, Or My Mom Will Shoot, and he swore off making comedies in order to save his career. Oscar has a few flaws (everyone wildly overacts, for starters), but it also has some genuinely funny lines and an impressive cast, including Kirk Douglas in a cameo appearance that doesn’t quite fit with the rest of the action. 8/10 stars.