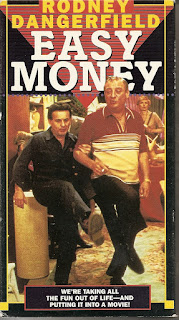 Blurb From the VHS Jacket: “Rodney Dangerfield is on the fast track to hilarity in his howlingly funny comedy about the pit falls of having it all.”

What Did I Learn?: “You’re the inspiration for twin beds” is a pretty awesome comeback.

You Might Like This Movie If: You really want to hear one of the two greatest musical hits of 1983.

Really?: 1) So, why does Rose have a working-class New York accent while her mom, Mrs. Monahan (Geraldine Fitzgerald) sounds rich and hoity-toity? 2) I had a hard time believing Julio (Taylor Negron) would agree to marry Alison (Jennifer Jason Leigh) without first having sex at some point in their relationship. 3) Wow – it really takes awhile for the plot to kick in, doesn’t it? 4) Wait, why does Clive invent an entire “Regular Guy” fashion line for Monty? If it’s just a ploy for Monty to become humiliated, and go back to his bad habits, wouldn’t it be an incredibly expensive ploy that could ruin the store’s fiscal year?

Rating: While many people believe Rodney Dangerfield’s best film was Back to School, I’ve always felt that Easy Money was the pinnacle of his movie career, and his least-watered-down work. Easy Money has a few problems in terms of its overall credibility and pacing (see: “Really?”), but Dangerfield is in his prime, and it’s a pleasure to watch him trade wisecracks with a pre-Goodfellas Joe Pesci. 8/10 stars.