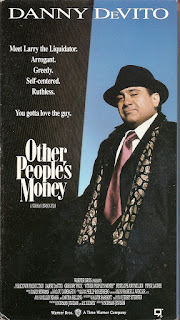 Happy New Year! In 2015, I reviewed a grand total of 100 films. That may sound like a lot of reviews, but it was actually an all-time low for this blog. (To give you a bit of perspective, I reviewed 122 movies in 2011, even though I started Schuster at the Movies only in September of that year). I will attempt to do a better job in 2016.

Blurb From the VHS Jacket: “A man is known by the company he keeps. But not Lawrence ‘Larry the Liquidator’ Garfield. He’s known for the companies he gets rid of.”

What Did I Learn?: 1) Successful people eat donuts – lots, and lots of donuts. 2) Lawyers are like nuclear warheads; once you use them, they fuck up everything. 3) In 1991, Donald Trump was “waiting tables.”

You Might Like This Movie If: You're really in the mood for some intelligent political commentary from Danny DeVito.
Really?: 1) So wait – why would Larry travel all the way to Rhode Island to inform Andrew Jorgenson (Gregory Peck) that he’s set to take over his company? Why the tip-off? 2) I had a hard time believing Larry would be offended by the offer of “greenmail” from Kate Sullivan. Isn’t he supposed to be some sort of cold-hearted snake? 3) Wow – Larry and Kate are apparently both fluent in Japanese. Isn’t it a rather difficult language to learn?

Rating: Other People’s Money is a slightly-dated indictment of the 1980s, but also an interesting film in the sense that DeVito’s character is both the protagonist and the villain (sort of). None of the main characters are entirely sympathetic (Peck’s Jorgenson is bull-headed and stuck in the past; the company’s president (Dean Jones) is ultimately out for himself; while Penelope Ann Miller’s Kate isn’t exactly a straight-shooter, either), and the movie drags a little until the end, when DeVito delivers an incredible speech to the company shareholders. 7/10 stars.