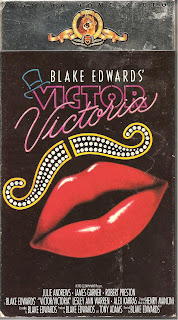 Synopsis: It’s two hours and 14 minutes of everyone agreeing that Julie Andrews in a tuxedo is the MOST SCANDALOUS THING, EVER!!

Blurb From the VHS Jacket: “Portraying, of all things, a gay female impersonator, Julie Andrews gives the hottest performance of her career – as do her superb co-stars James Garner and Robert Preston.”

What Did I Learn?: Apparently, everyone speaks English in Paris, France. [Wait, maybe I learned that from those Pink Panther movies].

You Might Like This Movie If: You'll watch anything that involves gender-bending.
Really?: 1) See: “What Did I Learn?” 2) So, why exactly is Labisse so gung-ho determined to ruin Count Grazinski’s career? He’s presented as a comic villain early in the movie, but this doesn’t really make a lot of sense.

Rating: I wanted to like Victor/Victoria a bit more than I did; Julie Andrews delivers an outstanding performance as the title character, and she shares some great chemistry with both Garner and Preston, but it’s far too long, the story really starts to meander in the second act after King Marchand discovers the big secret, and much of the humour seems to consist of doors being slammed and people yelling and screaming at each other. 6/10 stars.