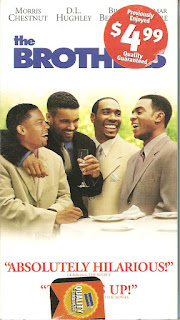 Blurb From the VHS Jacket: “THE BROTHERS is a fresh and humorous look at four African-American ‘brothers’  - lifelong friends who band together to navigate the turbulent waters of love and sex on their way to healthy, happy and committed relationships.”

What Did I Learn?: Ladies, if you want to seriously freak out your new boyfriend, tell him you once briefly dated his dad.

You Might Like This Movie If: You know that no matter what happens, the brothers are gonna work it out.
Really?: Hmm…I’m pretty sure that if I were holed up in a bungalow with a friend, and his insane, gun-toting ex-girlfriend was outside, shooting holes in the house in order to exact some revenge, I would drop to the floor and phone the police. I would not venture outside and attempt to talk her into handing me the pistol.

Rating: As a fan of character-driven comedies about dating and relationships (She’s The One, or The Brothers McMullen, for instance), I wanted to like The Brothers, but wow – it’s smug, trite, poorly written (funny how every conflict is soon resolved with both parties agreeing they’re partly at fault), and not terribly funny. I cannot recommend this movie. 4/10 stars.

Would It Work For A Bad Movie Night?: Not really, but take a drink every time any one of the four men basically pat themselves on the back and announce just how wonderful they are.