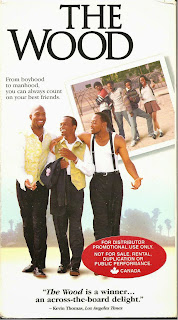 Blurb From the VHS Jacket: “Lots of guys have second thoughts about marriage. Three hours before his wedding, Roland (Taye Diggs) is having third, fourth and fifth thoughts. Good thing he’s got his best buddies Slim (Richard T. Jones) and Mike (Omar Epps) around to help sort those feelings out – and to remember their coming-of-age days in ‘The Wood’ (Inglewood, California)."

What Did I Learn?: If you want fresh-smelling breath for the high school dance, orange-flavoured Tic-Tacs are useless.

Really?: 1) So wait – Mike punches gang-banger Stacey, and the latter not only shrugs it off several months later, but actually respects him for showing some heart? Isn’t it much more likely that Stacey would shoot Mike, or at least make his life a living hell for the rest of the school year? 2) Um….the grown-up Alicia looks nothing like her teenaged self. Somebody should have recast the role. 3) Let me get this straight: Mike grows up to be a writer – a WRITER – and he nevertheless offers a rambling, trite, and cringe-inducing wedding toast at the very end of the film?

Rating: The Wood is a warm, often-funny, and highly relatable film about the pleasures and pains of growing up (it’s also filled with a lot of great music). Still, writer/director Rick Famuyima spends a bit too much time on flashbacks set in 1986-89, and not enough on character development – for instance, Roland isn’t the protagonist, but he’s the one getting married, and we have almost no idea how he got to this point in his life. 8/10 stars.