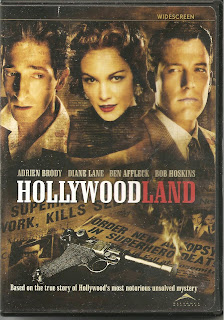 Blurb From the DVD Jacket: “Based on the true story of Hollywood’s most notorious unsolved mystery, Hollywoodland is a tale of glamour, scandal, and corruption in 1950s Los Angeles. When George Reeves (Ben Affleck), star of TV’s Adventures of Superman, is found dead in his home, millions of fans are shocked by the circumstances of his death.”

What Did I Learn?: It’s not a good idea to pick your kid up from school after you’ve downed half a bottle of Scotch.


Really?: 1) Funny how Louis Simo (Adrien Brody) continues to work on the case even though the client tells him his services are no longer required. Oh wait – that happens all the time. 2) So…. Reeves probably offed himself because he came to the realization he wasn’t a very good actor? Was there a point to this movie?

Rating: Set in Southern California at the end of the studio system, Hollywoodland brings to mind a number of other films, including Chinatown, LA Confidential, Sunset Boulevard and Auto Focus. Hollywoodland is basically a combination of two very different stories: it’s both a biopic of Reeves, which is quite good, and a film noir-ish investigation into his mysterious death. Overall, it’s a good movie that suffers from a rather lackluster ending (see: “Really?”) 8/10 stars.