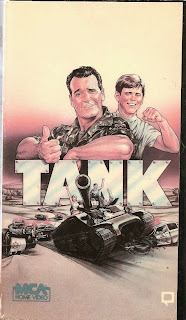 What Did I Learn?: If you see a law enforcement officer brutally assault a young woman for no good reason, your best course of action is to do nothing.

You Might Like This Movie If: You know it isn't easy to stop a tank.
Really?: 1) See: “Synopsis.” Come to think of it, isn’t Sergeant Carey in the infantry? How would he know anything about tanks? And how could he legally get his hands on machine-gun rounds or shells for the turret? 2) I realize Sheriff Buelton is supposed to be a redneck rube, and maybe he might mistake “posse comitatus” for “pussy communist” the first time he hears the phrase, but it’s not believable as a running gag. 3) So, what’s the point of watching Carey slap around a corporal for beating his wife and kids, or inspecting the mess hall? How do those scenes advance the story?

Rating: Tank is a highly implausible, but strangely watchable movie that feels more like two rather different films strung together: the first half is a disturbing drama of an innocent military family that gets victimized by an evil local dictator, while the second is basically Dukes of Hazzard slapstick and a whole lot of explosions and gunfire. Tank certainly isn’t Garner’s best outing, and I cannot recommend this movie. 4/10 stars.

Would it Work For a Bad Movie Night?: Sure - take a drink every time Deputy Euclid (portrayed by the late James Cromwell, who made many better films) gets humiliated.