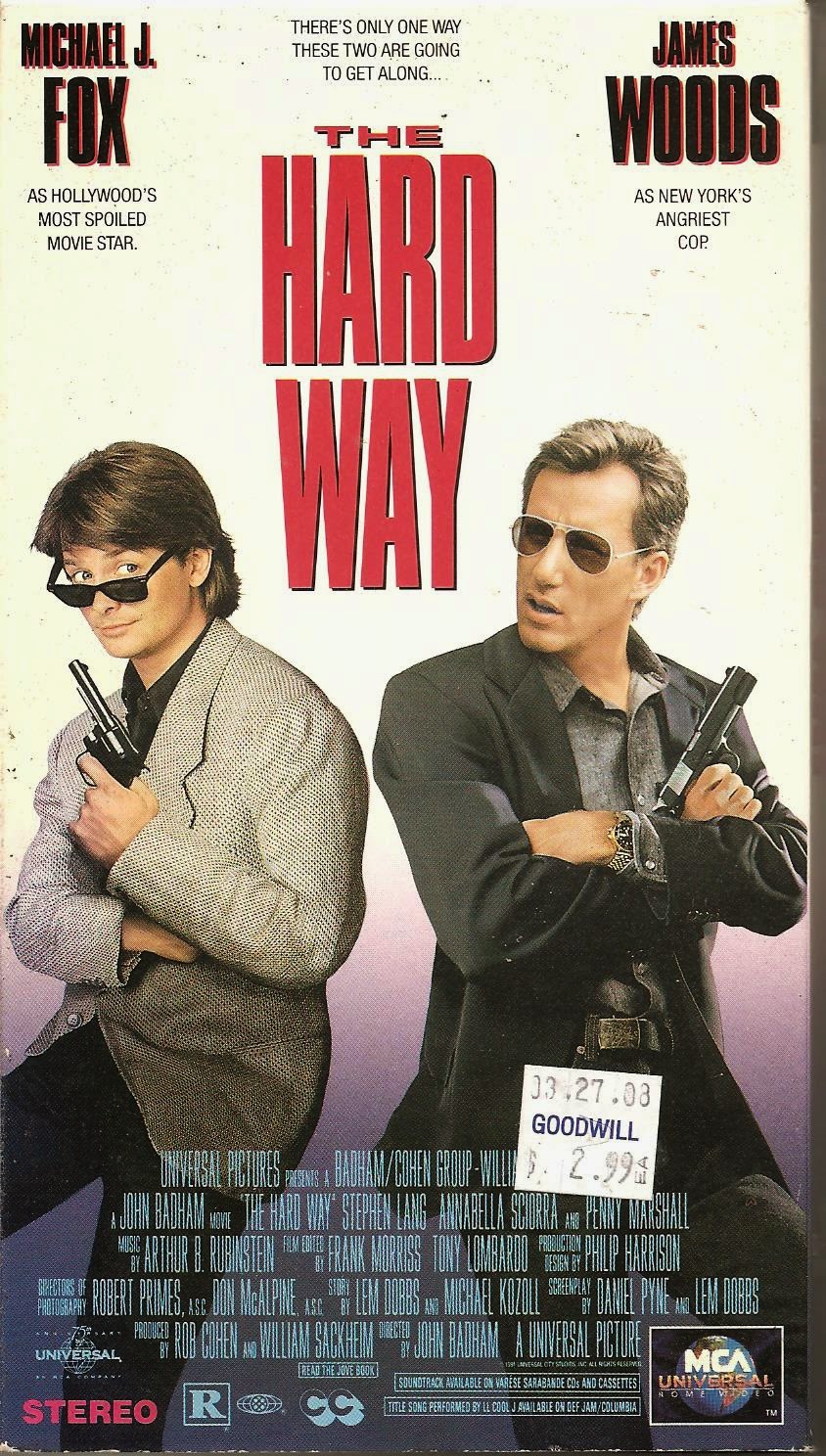 James Woods Film Fest Movie #1.  A few years ago, I referred to Mr. Woods as Schuster at the Movies’ “favourite unlikeable guy” because he’s a talented actor, and wow – he has played a LOT of scumbags over the years. I’ve been waiting to do a tribute, and I figured it was time. Please click the links to read my reviews of: Joshua Then and Now, Killer: A Journal of Murder, Night Moves, The Getaway, Straight Talk, Casino, Any Given Sunday, True Crime, Contact, and Against All Odds.

Synopsis: Hard-boiled cop is forced to team up with spoiled Hollywood turd. Will they initially hate each other and grudgingly develop a mutual respect? Will the actor help the policeman express his feelings for the long-suffering girlfriend? Will they catch that crazy serial killer who’s been terrorizing the city? Take a wild guess how this story develops…. (1991)

Blurb From the VHS Jacket: “Nick Lang (Michael J. Fox) is a popular movie star who desperately wants to break out of his ‘nice guy’ screen image. Believing he’ll land a role as a tough homicide detective if he can hang out with the real thing, Lang leaves Hollywood to spend a few weeks on the streets of New York with detective John Moss (James Woods).”

What Did I Learn?: 1) You're not gonna learn what it means to be a cop by eating hot dogs and picking your teeth and asking stupid questions. [Cops] live this job. It's something [they] are, not something [they] do! Every time a cop walks up to a car and has to give a speeding ticket, he knows he may have to kill someone or be killed himself. That's not something you step into by strapping on a rubber gun and riding around all day. 2) Michael J. Fox doesn’t really play a tough guy very well. Oh wait – I learned that from Casualties of War. 3) If a serial holds you at knifepoint when you’re behind the wheel of a moving vehicle, your best course of action is to, um… drive like a maniac at top speed through every fruit stand in New York City and hope you don’t hit anyone.

You Might Like This Movie If: You figure it must be a sequel to this.
Really?: 1) I had a bit of a hard time believing Moss would let Lang punch him in the face not just once, but four times. 2) Hold on… I can see Moss’ captain ordering him to take Lang on a ride-along, and to spend time with him, but come on – he can’t force him to provide lodgings for Lang on his sofa bed. 3) See: “What Did I Learn?” #3.

Rating: I have to give The Hard Way something of a mixed review. While I liked the chemistry between Woods and Fox, and the film has a number of funny lines and impressive stunts, the plot becomes increasingly difficult to swallow, and director John Badham sets aside the necessary character development for a lot of unnecessary chills and spills. The final fight, featuring a giant animatronic replica of Fox’s head, is just plain ridiculous. 6.5/10 stars.