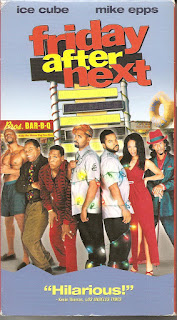 Please click the links to read my reviews of Friday and Next Friday.


Synopsis: Grumpy rapper-turned-actor and village idiot cousin throw their weight around as rent-a-cops, and beat the crap out of old St. Nick.


Blurb From the VHS Jacket: “The Party’s Back In The ‘Hood! Craig and Day-Day have finally gotten their own crib. When a fake Santa robs their rundown apartment on Christmas Eve they embark on a comical adventure in an effort to track down the bandit and retrieve the stolen loot. Meanwhile, Day-Day’s rent-a-cop tactics cause them to continually miss their chance to catch the Santa and instead has them squaring off against innocent caroling ladies, shady neighbourhood kids and the police!”


What Did I Learn?: 1) Bringing hot chicks in lieu of cash to a rent party is an acceptable trade-off to most young men. 2) If you grab a would-be rapist’s nuts with a pair of vice grips, there’s a very good chance he will kill you the second you let go.


Really?: Friday After Next isn’t meant to be taken all that seriously, but I had a bit of trouble believing that: a) Craig (Ice Cube) would ever hang out with Day-Day, let alone share and apartment, or b) any woman would respond favourably to “it ain’t ya booty, it’s ya beauty.”


Rating: Friday After Next is one of those rare sequels that’s better than the previous film (although it doesn’t quite match up with the original). The script is a bit silly, and Ice Cube once again pretty much walks through it playing himself, but Friday After Next delivers some very funny lines and a surprising number of laughs. 7/10 stars.