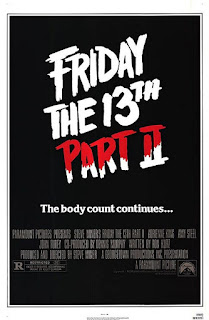 
Blurb From the VHS Jacket: “Just when you thought it was safe to go back to camp...” [no VHS jacket – taken from imdb.com]


What Did I Learn?: If you’re staying at a cabin that was the scene of a gruesome murder five years earlier, and you have a choice between going into town to catch some live music or staying behind to have sex, go for the first option – trust me.


You Might Like This Movie If: You know there are far scarier things you can face on a Friday than Jason Voorhees.


Really?: 1) So wait – Ginny’s big brainstorm is to put on a mouldy sweater and convince Jason she’s really his dead mom? Oh, that's fucking brilliant... 2) Shouldn’t these kids be at least slightly likeable so the audience cares about what happens to them? 3) I had a hard time believing two teenagers would fail to notice their monster truck getting towed just ten feet away from them... come to think of it, wouldn’t that be a difficult prank to pull off? 4) Since when did it become illegal to run into a forest? And there’s no way the sheriff would attempt to pursue Jason on foot, in the woods for such an extended period of time. (Oh – and dummy left his car door open).


Rating: I was never a fan of the Friday the 13th films when I was a kid, I don’t think I missed out on much. While Part II has better-looking actors and actresses than the original Friday the 13th (which I viewed without sound at a recent party, so I’m not going to write a review), none of them have any talent. The film consists of 30 minutes of set-up followed by scenes of each obnoxious teenager getting iced. Friday the 13th Part II has some nice T&A shots, but it’s pointless, brainless and dull. I cannot recommend this movie. 2/10 stars.


Would It Work For a Bad Movie Night?: It certainly did last Saturday.