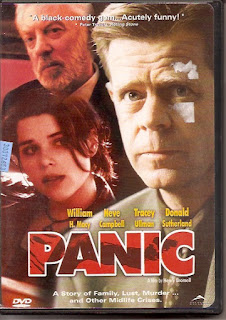 Synopsis: William H. Macy plays a sad-sack ordinary guy who runs afoul of organized crime….no, that’s the Synopsis for The Cooler. Um… likeable killer sees a shrink….no, that’s Analyze This. Badass son confronts not-so-nice father about his reluctance to work in the family business. Nope, that’s Return of the Jedi.
Blurb From the DVD Jacket: “A story of family, lust, murder….and other midlife crises.”
What Did I Learn?: Every man has a destiny. Life is not…random. 2) If you’re going to kill somebody, keep it fast-and-simple, don’t meet the victim’s eyes, just walk up, do the job and walk away. 3) The Billy Crystal/Gregory Hines action-comedy Running Scared didn’t leave much of an impression on moviegoers.
You Might Like This Movie If: You know that some people really need to blaze their own career path.
Really?: 1) So, Alex (Macy) is a professional assassin who lives a boring middle-class life lifestyle with a wife and a son (don’t these guys charge hundreds of thousands of dollars for a hit?), and he suddenly develops a conscience in his mid-40s? 2) I’m curious: why does Alex’s dad, Michael (Donald Sutherland) browbeat Alex into murdering his psychologist, even to the point of spilling the beans to Martha? Why doesn’t he do it himself? He clearly stalked Dr. Parks (John Ritter) to snap a photograph. 3) I had a bit of trouble believing that Sarah (Neve Campbell) would somehow fall for a somewhat-older man with a less-than-dynamic personality when she apparently spends most of her free time banging hot chicks. 4) How did Michael develop his unusual business? Who are his clients - and his victims? Has he or Alex ever run afoul of the law?  How do they take assignments? I think some of these details should have been fleshed out. 5) Wow…that is one precocious kid…
Rating: Panic is an interesting character-driven thriller (I’m not sure how else to describe this film) that features a fine performance from Macy, and a highly impressive cast, but somehow misses its mark. Panic has a few credibility issues (see: “Really?”) but it’s biggest problem is that it fails to adequately resolve a number of key relationships, and I’m not convinced that the one between Alex and Sarah is even necessary. 6.5/10 stars.