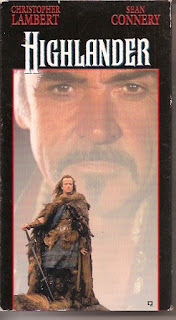 Synopsis: Sean Connery plays an older tough guy who assists a wet-behind-the-ears hero take on a dangerous criminal….no, that’s the Synopsis for The Untouchables. Um…Scottish lad engages in risky behavior, yet somehow manages to cheat death and outwit a psycho….no, that’s Trainspotting. Badass with a cool weapon travels to mysterious, far-away city to battle a great evil….no, that’s Krull.
Blurb From the VHS Jacket: “Connor MacLeod is a Scot who should have died in 1536. But he belongs to a rare race of immortals that can only be killed when beheaded by a sword.”
What Did I Learn?: 1) Love is for poets. 2) Cops can’t read. 3) There can be only one!
You Might Like This Movie If: you're able to thank your lucky stars you aren't watching the sequel, Highlander II: The Quickening.
Really?: 1) So, let me see if I get this straight…Ramirez (Sean Connery, who gets second-billing but doesn’t actually appear until about 45 minutes into the movie) has no idea how the immortals were created, or where they came from, but he knows everything about the gathering and the so-called prize. 2) Speaking of the prize, that’s it? Connor loses his immortality, and feels a oneness with all living creatures? How would the Kurgan have used that to enslave humanity? 3) I’m a little unclear about this whole immortality thing… I can understand Connor and others like him being impervious to drowning, stab wounds, falls, and such but what would happen if he were to be thrown into a wood-chipper, or if he found himself at Ground Zero during an atomic bomb explosion? How could he survive either of those gruesome deaths?
Rating: I hadn’t watched Highlander since the late 1980s, so I wasn’t entirely sure what to expect. The film features some stylish sword-fighting action sequences and a highly imaginative story, and I quite liked the interplay between Connery and Lambert when they’re together in Scotland. On the other hand, the plot is predictable and chock full of holes, and Lambert isn’t the world’s greatest actor – at least not in English. 6/10 stars.