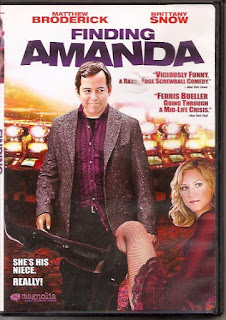 Gambling Addiction Movie #1 (Please click the links to read my reviews of The Cooler, Vig/Money Kings, One Way Out, The Runner, and The Music of Chance)
Synopsis: Matthew Broderick portrays a likeable, fun-loving gent who hides a secret life from his loved ones….no, that’s the Synopsis for Ferris Bueller’s Day Off. Um…Television honcho really dislikes the project he’s working on….no, that’s The TV Set. Um…troubled addict finds caring prostitute with a heart of gold in Sin City….no, that’s Leaving Las Vegas.
Blurb From the DVD Jacket: “She’s his niece. Really!”
What Did I Learn?: 1) Vegas call girls apparently earn so much dough they can afford to buy drugs, drinks in expensive nightclubs, designer clothes, numerous vehicles, and financially support abusive boyfriends who don’t work. (Come to think of it, I’m not sure it makes sense for Taylor to remain so committed to his goal of putting Amanda in rehab and getting her away from prostitution when it’s pretty obvious she doesn’t have a drug problem and her career options are a tad limited). 2) When Ed Begley Jr. isn’t happy, people lose their jobs.
You Might Like This Movie If: You know that some Amandas are better left unfound.
Really?: See: “What Did I Learn?” 2) So, is Taylor a wealthy guy who can afford to get fired from his “last chance” in the TV biz and drop $100 grand in the casino, or not? This is never made clear. 3) Ok, I realize Taylor has a serious gambling problem, but does he seriously think he can steal a $100,000 cheque from his wife and then lie about it to her?
Rating: Finding Amanda is a wildly uneven misfire; it delivers a few laughs, but it’s not funny enough to work as a comedy (the film is difficult to categorize), and I couldn’t help myself from thinking that Broderick (who does his best with the material, but his character is a little too sleazy to be terribly likeable) and Tiffany Snow appear to be acting in two different movies. 6/10 stars.