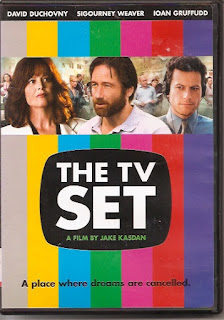 Happy New Year! I’ll post my best and worst of 2017 later on in January.
This would have been perfect for my tribute to movies about the television industry.
Synopsis: David Duchovny plays a grumpy Hollywood writer who sees his very special screenplay turned into something cheap and commercial…. wait, doesn’t that sound an awful lot like every single episode of Californication?
Blurb From the DVD Jacket: “A place where dreams are cancelled.”
What Did I Learn?: Something like 82% of all people think suicide is really depressing.
You Might Like This Movie If: You don't expect much from television.
Really?: Alice has got to be the world’s most useless manager; why does Mike (Duchovny) stay with her when she clearly undermines him at various points in the movie?
Rating: The TV Set is a clever, and highly cynical satire of the television industry, and the ways in which it corrupts creative visionaries into producing brainless and mediocre crap. Duchovny is terrific as the frustrated, and long-suffering Mike Klein, but Sigourney Weaver really steals the film as the narcissistic Lenny, an entertainment exec who never encountered a beautiful and original idea she didn’t wish to change. My only complaint is that it could have been a little funnier. Watch for Justine Bateman (best remembered as Mallory Keaton from Family Ties) as Mike’s wife. 8/10 stars.