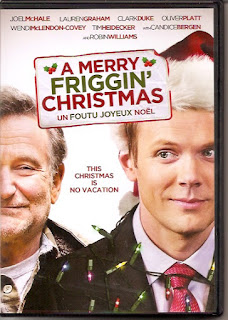 Christmas Movie #3 - Merry Christmas!
Synopsis: Uptight dad, undersexed wife, and overprotected kids reunite with Mork and Murphy Brown on Christmas Eve.
Blurb From the DVD Jacket: “Boyd and his family are forced to spend a dreaded Christmas at his parents’ house with his eccentric father and he has been avoiding for years.”
What Did I Learn?: Santa prefers bourbon and asparagus to milk and cookies.
You Might Like This Movie If: You're really into Christmas.
Really?: 1) A Merry Friggin’ Christmas isn’t meant to be taken all that seriously, so maybe I can overlook Boyd outrunning a police car and facing no consequences or the mystery surrounding the hobo Santa (Oliver Platt), but here’s the thing that gets me: Boyd is determined not to repeat the mistakes of his alcoholic father, Virgil (Robin Williams, in one of his very last roles), but Virgil struck me as sort-of a cool dad in this flashbacks we’re shown; cynical and drunk, perhaps, but he helps his kids assemble their toys, and he never comes across as an alcoholic monster. 2) Hmm… I’m pretty sure that if I were eight years old and my little brother ate an entire jar of 40-year-old pickles, I would promptly inform my parents, just to be sure he wouldn’t need to have his stomach pumped. 3) Luann and Donna are surprisingly chipper the morning after they polished off an entire bottle of vodka.
Rating: I have to admit that I popped A Merry Friggin’ Christmas into my DVD player expecting something awful, and found myself pleasantly surprised. AMFC has a few credibility problems (see: “Really?”), but it’s quite funny in places, and I really liked the interactions between Boyd and his dad when they’re on the road; the film has a sweetness that never descends into sappiness. 7.5/10 stars.