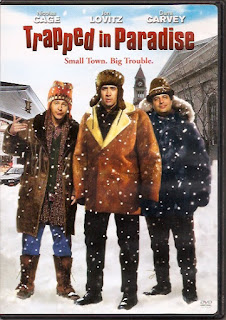 Christmas Movie #1 (Please click the links to the Christmas-themed movies I reviewed in 2011, 2012, 2013, 2014, and 2015)
Synopsis: Three loveable crooks evade capture by the police. No, wait…that’s the Synopsis for Quick Change. Um….three loveable crooks hide out with family on Christmas Eve. No, that’s We’re No Angels. Um…foul-mouthed crook brings feuding family together during the holidays. No, that’s The Ref. Um…small town with a lot of charm teaches troubled soul the true meaning of Christmas. No, that’s It’s a Wonderful Life.
Blurb From the DVD Jacket: “Small Town. Big Trouble.”
What Did I Learn?: Apparently, a horse-drawn sled (not a wheeled carriage, but a sled, travelling on snow-covered pavement) is capable of outrunning an entire fleet of police cars on Christmas Eve.
You Might Like This Movie If: You know that Carvey and Lovitz are master comedians who would never even think about selling out for commercial success.
Really?: 1) See: “What Did I Learn?” 2) Speaking of which, how many police cars does this town own? If there’s such a massive, and unnecessary police presence, how can the Firpos walk through the main street - masked, and carrying shotguns - and move everyone from the diner to the bank without alerting the fuzz? 3) So, Dana Carvey is a master impressionist, yet he spends the entire film sounding like a wimpy Mickey Rourke. That’s just sad.
Rating: I hadn’t watched Trapped in Paradise since it was released in theatres in 1994, so I was unprepared for how poorly-written, unconvincing and directionless it turned out to be. Comedic heavyweights Carvey and Lovitz are wasted as two of the ethically-challenged Firpo brothers (Lovitz referred to this comedic flop as “trapped in shit,” and it certainly didn’t help either of their careers), while Cage often looks as though he would rather be anywhere else. I was going to give this film 4.5 stars out of 10, but I recently checked out the atrocious Four Christmases, and came to the realization that Trapped in Paradise is at least watchable, and offers a few laughs now and then. I'm feeling festive, so I'll give it a barely-passing grade. 5/10 stars.