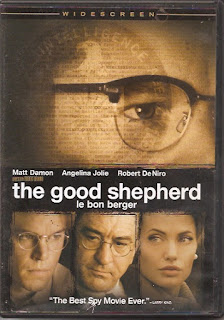 CIA Movie #2
Synopsis: Did you ever want to see a spy movie that strangely lacked any action, intrigue, suspense or erotically-filmed sex scenes? Today is your lucky day…
Blurb From the DVD Jacket: “Matt Damon, Angelina Jolie and Robert De Niro star in this powerful thriller about the birth of the CIA.”
What Did I Learn?: 1) The British are a particularly civilized people. They don't eat their own. They have somebody do it for them. 2) Eating chocolates and seeking approval are both dreadful habits. 3) The mental facility to detect conspiracies and betrayal are the same qualities most likely to corrode natural judgment. Everything that seems clear is bent. And everything that seems bent is clear. Trapped in reflections, you must learn to recognize when a lie masquerades as the truth, and then deal with it efficiently, dispassionately. 4) Friends can be enemies and enemies friends. 5) Everything is a secret. 6) Polygraph machines don’t understand the Russian soul.
You Might Like This Movie If: You know that a good shepherd must be everywhere at once.
Really?: So, Wilson never reads his dad’s suicide note until he’s well into middle age? He wasn’t even remotely curious until that particular moment? And wow…it really makes for a lacklustre ending.
Rating: I wanted to like The Good Shepherd a lot more than I actually did. It’s a stylish production with a great cast (too bad Joe Pesci only appears for about two minutes and we never see him again), and some terrific acting - I especially liked Michael Gambon’s portrayal of the troubled Dr. Fredericks, but the story is turgid, humourless, and never goes anywhere. More importantly, for a biopic about Edward Wilson, the film reveals almost nothing about the motivations of Damon’s character. Why did he get into espionage? Is he a super-patriot? Was he running away from his loveless marriage to Clover? Does he have daddy issues? After 139 minutes, I had absolutely no idea. 6/10 stars.