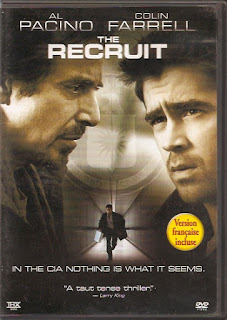 CIA movie #1 (Please click the links to read my reviews of Spy Game, The Hunt for Red October, The Tailor of Panama, Confessions of a Dangerous Mind, and 3 Days of the Condor)
Synopsis: Al Pacino slowly corrupts talented-and-idealistic young man….oh wait, that’s the Synopsis for The Devil’s Advocate,and City Hall... and Two for the Money.
Blurb From the VHS Jacket: “Academy Award Winner Al Pacino (Scent of a Woman) and Colin Farrell (Minority Report) take you deeper into the CIA than you’ve ever been before in this action-packed psychological thriller.”
What Did I Learn?: 1) Nothing is…what it seems. 2) Everything is a test. 3) Rule Number One: do not get caught. 4) No country with a McDonald’s has ever attacked the United States.
You Might Like This Movie If: you've always wanted to join the CIA.
Really?: 1) I’m pretty sure CIA field training is pretty intensive, but I had a hard time believing it involves recruits getting beaten up or subjected to electrical torture. 2) Wait, the CIA has a computer virus that can travel through wall sockets? WTF?! 3) So, Layla’s ancestry is French and Algerian, yet she was raised by an all-American family, and she’s a sleeper agent…. For whom, exactly? This is never spelled out. 4) Speaking of Layla, is she really supposed to believe that a guy who graduated at the top of his class at MIT and knows how to create highly advanced software applications would move from Boston to DC just to take a crappy data entry job? Um….wouldn’t a guy who just went through several intensive weeks of CIA training know the difference between blanks and live ammunition? 6) Call me cynical, but I have a feeling a real CIA assassin would simply shoot James without explaining the entire movie plot to him, first.
Rating: I have to give The Recruit a bit of a mixed review. Pacino is fun to watch as the cynical, mysterious and surprisingly likeable Walter Burke, and I liked the chemistry between Farrell and Moynahan. The first half of the film, when James is recruited and receives his training, is quite enjoyable, but the second quickly becomes a mess with a plot that stops making sense (see: “Really?") 6.5/10 stars.