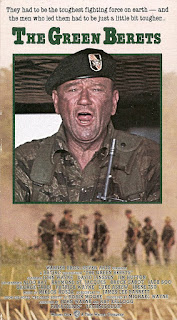 Back in 2012, I had the pleasure of reviewing a number of Vietnam War movies including Go Tell the Spartans, The Deer Hunter and Apocalypse Now.  I always intended to review The Green Berets, but I never owned a copy of it until recently.

Oh, Happy New Year! At some point in 2017, I will tackle a related film genre: Coming Home From Vietnam movies.

Synopsis: The Duke single-handedly wipes out the Viet Cong.

Blurb From the VHS Jacket: “The fire-packed granddaddy of all Vietnam War films.”

What Did I Learn?: Apparently, South Vietnam looks a lot like the forests of North Carolina and Georgia.

You Might Like This Movie If: You know that John Wayne could sell anything to the American public.


Really?: 1) See: “What Did I Learn?”  and “Synopsis.” Seriously, isn’t Wayne a little too old, and a little too out-of-shape to play an in-the-field Special Forces officer? 2) So wait... the North Vietnamese somehow occupy and maintain a captured luxurious French mansion (complete with electricity and running water) for the use of their senior officers somewhere in South Vietnam? That's ridiculous. 3) The first 15-20 minutes are just revenge porn for 1960s-era conservatives: obtuse, and not-very-honest anti-war reporters ask a bunch of stupid questions, and the military officers not only respond with clever zingers and factual sound bits, but they receive actual applause from military families. It’s a bit much.

Rating: As I noted in my review of The Longest Day, John Wayne made some truly great Westerns, but his other films were generally quite awful. The Green Berets has a lot of problems, but it isn’t nearly as bad as its critics charged (Roger Ebert famously gave it zero stars, and Oliver Stone later made Platoon as a response to its pro-war message).  The movie’s biggest problem is that its politics consistently get in the way of good storytelling (in the original script, for instance, Colonel Kirby and his men raid a mansion in North Vietnam, which makes a lot more sense), and all too often, dialogue descends into simplistic editorializing. 5.5/10 stars.