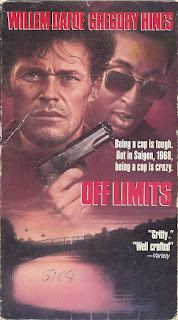 Blurb From the VHS Jacket: “Going Too Far Is What They Do Best.”

What Did I Learn?: “Bullshit and science rule the world.”


Really?: 1) [NO SPOILERS] is the killer? The only other major character with whom the two leads interact? Isn’t that a bit ridiculous? Come to think of it, why would he save their lives when they run afoul of the local constabulary? 2) I realize McGriff (Willem Dafoe) and Perkins (Gregory Hines) are decent and dedicated cops, but I had a hard time believing they would antagonize senior officers and drop their other responsibilities (tackling drug use among the troops, and tracking down deserters, for instance) in order to pursue a case that really belongs to the Saigon police.

Rating: Off Limits is an enjoyable, albeit somewhat contrived and often-sleazy thriller that’s more of a police procedural than a Vietnam War movie. Off Limits isn’t bad for an evening’s entertainment, but I have to deduct at least one star for a terrible ending (see: “Really?”). 6.5/10 stars.