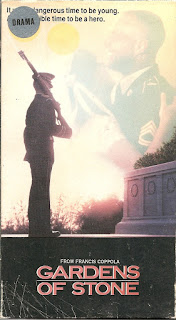 Synopsis: Did you ever want to see a soldier’s-eye-view of the Vietnam War that’s basically a series of Georgetown receptions and dinner parties, and that doesn’t actually take place in Vietnam? This is your lucky day!

Blurb From the VHS Jacket: “GARDENS OF STONE takes a different look at the Vietnam era – a drama that captures the anguishing effect of the war on the relationships of the men and women at home.”

What Did I Learn?: 1) Worms employ asexual reproduction; 2) Second Lieutenant is probably the worst job in the US Army.

You Might Like This Movie If: You're in the mood for something slow, quiet and introspective.
Really?: 1) I could see Sgt. Hazard lending Willow a few bucks for his big date, but he throws in his car and his bachelor pad? He’s certainly a prince of a guy! 2) I realize they’re playing war games, but I’m sure Hazard could get away with kidnapping his superior officer (Dean Stockwell) without facing some sort of court martial afterwards.

Rating: Gardens of Stone is a very slow-moving, but ultimately worthwhile character-driven drama about Vietnam-era fighting men and the women who love them. Gardens of Stone features a number of great performances – Angelica Huston as a passionate anti-war reporter, James Earl Jones as a cynical Master-Sergeant who has seen it all, and D.B. Sweeney as the eager young recruit who really wants to make a difference, but James Caan really carries the film as Sgt. Hazard – a decent and decorated veteran who knows the war is unwinnable, and rages against the slaughter of good men. Highly recommended. 9/10 stars.