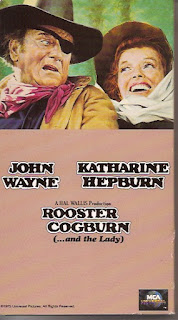 Dang – I could have used this for my salute to John Wayne Westerns!
Synopsis: It’s an unnecessary sequel to True Grit, combined with a reboot of The African Queen, featuring over-the-hill leads and forgettable villains.
Blurb From the VHS Jacket: “Two of the most popular stars in screen history are brought together for the first time in the follow-up to True Grit.”
What Did I Learn?: You can’t lock up a man’s whisky! 2) Out in the Territories, they prize a dead shot more than a lady’s charms. 3) Water is like a woman: sly and fickle – you gotta watch it every minute! 4) People are rotten. 5) Women can no more keep their mouths shut than a yellow-tailed catfish. [These are quotations from the film, by the way]
You Might Like This Movie If: you have a thing for larger-than-life smart alec roosters...
Really?: 1) Holy shit, the characters in this film are transporting a wagon of nitro-fucking-glycerin! I’m pretty sure you can’t go whitewater rafting or charging down a bumpy hill without blowing yourself to Kingdom Come if you’re carrying cases of nitro. 2) Ok, I realize Eula is a naïve Bible-thumper, but I had a bit of trouble believing she would insult a bunch of men she knows are outlaws, or that she wouldn’t even flinch when Hawk decides to shoot at the ground near her feet. 3) See: “Synopsis.” Seriously, Wayne and Hepburn are far too old to carry an action-adventure, and the film is eerily similar to The African Queen in a number of ways. Oh, and why does Rooster address Eula as “Sister” every couple of minutes? She’s not a nun. 4) Is there a reason Rooster doesn’t simply hide the recovered nitro glycerin and escape to acquire some additional reinforcements?
Rating: While I enjoyed the banter between Wayne and Hepburn, Rooster Cogburn is a weak sequel to True Grit for a number of reasons, most notably a script that doesn’t make a lot of sense and the age of the lead actors – Eula is a bit too old to be living with her elderly father in a Native community. Check it out if you’re a John Wayne completist. 6/10 stars.