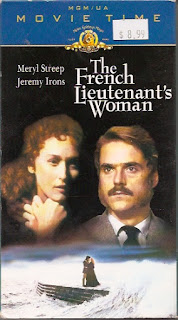 Synopsis: It’s 30 minutes of narcissistic actors sneaking around on their partners, circa 1980 tacked on to 90 minutes of depressing Victorian melodrama.
Blurb From the VHS Jacket: “Embraced by audiences and critics alike - and garnering five 1981 Academy Award nominations, including Best Actress for Streep - The French Lieutenant’s Woman will forever remain one of the most literate, imaginative and visually stunning love stories ever to grace the screen.”
What Did I Learn?: In 1857, it’s estimated there were 80,000 prostitutes in the country of London, and out of every 60 houses, one was a brothel.
You Might Like This Movie If: Much like Charles, you believe there's something alluring about a woman who doesn't have all of her marbles.
Really?: 1) Ok, I realize Charles (Jeremy Irons) falls hopelessly in love with Sarah (Meryl Streep), and lovestruck people don’t always make good decisions, but it’s painfully obvious that she’s completely insane [Spoiler Alert: Sarah never had sex with the French lieutenant, yet she claims otherwise because she wants to be scorned and ridiculed by the residents of Lyme] and she doesn’t seem all that interested in being saved. 2) So, three years pass, Sarah gets a cushy job and her mental illness seems to disappear? Ok, whatevs….
Rating: I have to give The French Lieutenant’s Woman something of a mixed review; while I appreciated its unique attempt at storytelling (the relationship between thespians Anna and Mike takes a strange turn when they portray star-crossed Victorian lovers during a movie shoot), its impressive cinematography, and the acting efforts of Streep and Irons, the story itself (which chucks aside the complex, multi-layered approach of John Fowles’ novel and inserts the Mike-and-Anna subplot), seemed simplistic and difficult to believe (see: “Synopsis” and “Really?”) and the characters left me cold; I didn’t care about any of them. 7/10 stars.