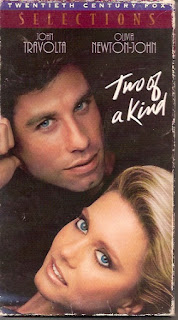 Synopsis: The leads from Grease must convince the Almighty not to destroy the world.
Blurb From the VHS Jacket: "It's a match that could only be made in heaven."
What Did I Learn?: God sounds a lot like Gene Hackman.
You Might Like This Movie If: You have a deep love for the music of Olivia Newton-John.
Really?: 1) It’s funny how Zach (John Travolta) is an inventor, but this is never explored – he doesn’t “MacGyver” his way out of a problem, and we aren’t given any information about why he became interested in science or inventing. 2) So, wait… Charlie the angel (Charles Durning) clearly informs the Devil (Oliver Reed) that when God initiates a second flood, the inhabitants of Earth will all go to Heaven; the Devil doesn’t believe him, and attempts to thwart Zach and Debbie (Olivia Newton-John) from developing a relationship. Ok, so why does the Devil believe Charlie later in the movie when he tells him the same thing? That doesn’t compute. 3) Holy shit, why does Charlie need three – count’em three sidekicks? What was the point of introducing Debbie’s (Olivia Newton-John) horny roommates and her creepy landlord, when none of these characters are further developed or even used to advance the plot? Why so many superfluous supporting characters? 4) Hold on – Zach breaks into Debbie’s apartment, robs her of the remainder of her stolen cash, and she decides to follow him for a walk-and-talk on the street? 5) Hmm…. Debbie is fired for openly flirting with Zach during the actual bank robbery. Why doesn’t anyone think to search her handbag?
Rating: I can see why Two of a Kind pretty much killed off Newton-John’s acting career and put Travolta in the doghouse for most of the 1980s. While I have to give this movie a few stars for originality and ambition, it doesn’t work for a number of reasons: the plot is a contrived mess, there are far too many undeveloped sub-plots and useless characters, and Newton-John wildly overacts. I can’t recommend this movie. 4/10 stars.
Would It Work For a Bad Movie Night?: Why not? Take a drink any time ONJ’s “Twist of Fate” or a film score version of it is used.