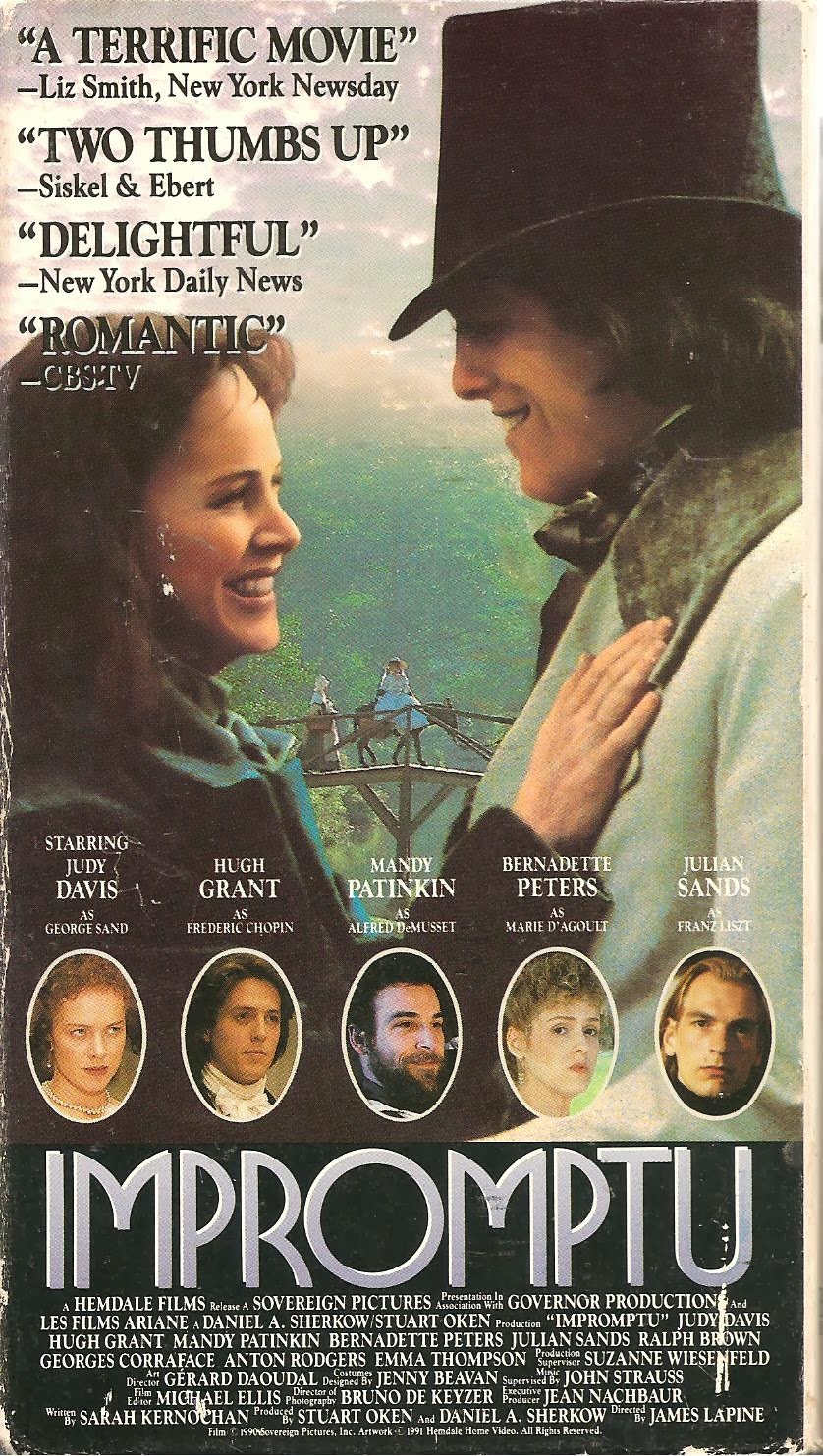 Blurb From the VHS Jacket: “Two lovers could never be more different than the brazenly forward George Sand (Judy Davis) and frail romantic Frederic Chopin (Hugh Grant). Yet they are drawn together by an unnerving bond. A bond that can’t be broken despite  the best efforts of those around them to keep them apart.”

What Did I Learn?: Even when he’s affecting a foreign accent, and portraying an historic figure from the 1830s, nobody plays a loveable, classy, un-macho ladies man quite like Hugh Grant.


Really?:  Impromptu is historical fiction, so it’s a little difficult to criticize on these grounds. I’m not that knowledgeable about tuberculosis, or how contagious it is/was, but I have to wonder why Sand would want to bed Chopin so badly, knowing she could potentially develop his illness. (And keep in mind, this movie takes place about a century before the development of antibiotics).

Rating: I have to give Impromptu something of a mixed review. The script is clever, and the film boasts a number of good performances, yet with the sole exception of Chopin, none of these characters are particularly likeable. Frankly, I took a strong dislike to most of them during the scene when the intellectuals “reward” their aristocratic hosts with a mean-spirited play. Impromptu certainly has its moments, but I don’t think I would watch it again. 6.5/10 stars. 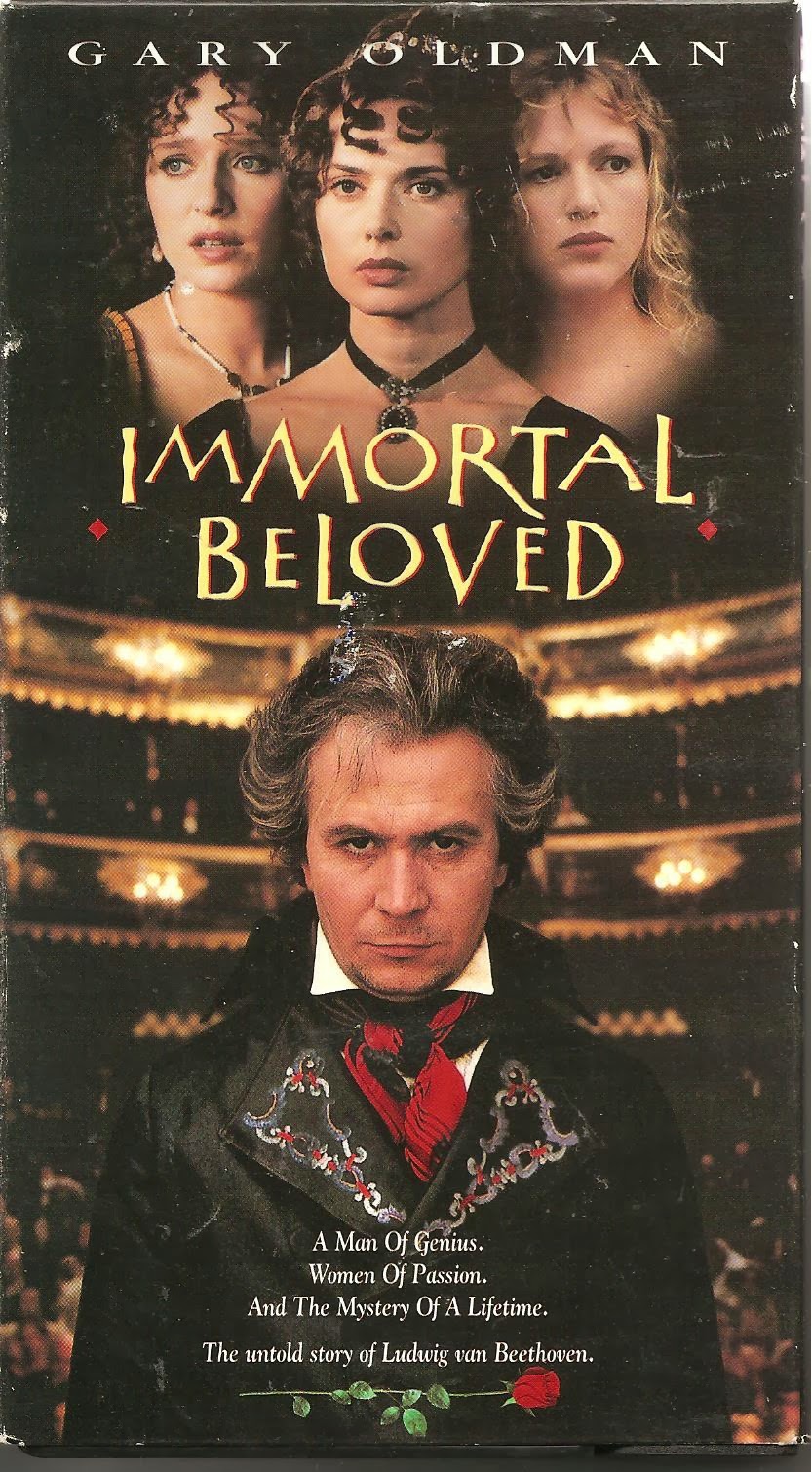 Blurb From the VHS Jacket: “A man of genius. Women of passion. And the mystery of a lifetime. The untold story of Ludwig van Beethoven.”

What Did I Learn?: Beethoven was a huge asshole.

You Might Like This Movie If: You believe the Ode to Joy 9th Symphony is such a beautiful piece of music anyone should be able to sing it.

Really?: 1) Immortal Beloved is historical fiction, so I’m not sure how much of this film is true, and how much is fabricated. I will say that I had a hard time believing Beethoven would face no consequences after promising Clemens von Metternich a patriotic, pro-Austrian symphony, and then never delivering. 2) I can see Schindler (Jeroen Krabbe) going along with a lot of Beethoven’s bullshit, but helping him take a young boy away from his mother? Wow...that’s low.

Rating: Immortal Beloved is an interesting companion film to Amadeus; both are set in Vienna (although Beethoven’s heyday was shortly after Mozart’s), and deal with very different musical geniuses. Both movies are filled with great performances (Oldman is outstanding as the troubled maestro), stunning visuals and incredible music. My only complaint about Immortal Beloved is that it’s hard to sympathize with such a nasty character as Beethoven, especially when he seizes custody of his nephew, Karl. (see “What Did I Learn?” and “Really?). Still, Highly Recommended. 9/10 stars. 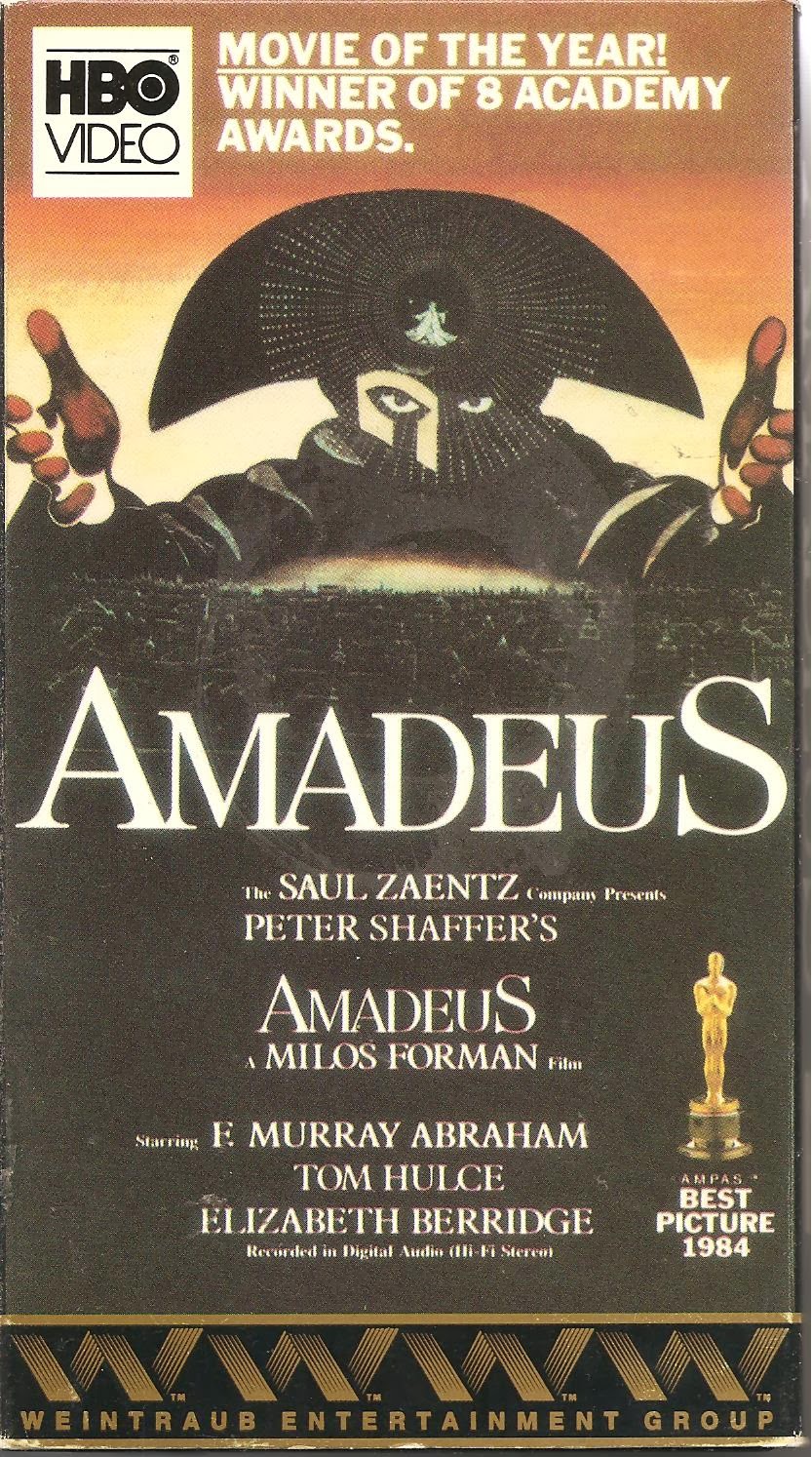 Synopsis: Mozart’s scheming, jealous rival sets out to destroy the young genius by, um... attending all of his performances, hiring a maid for Mozart’s apartment, paying him to write a piece of music, and taking him home after he collapses during a performance? Gee...what a monster.

What Did I Learn?: Those 18th Century three-cornered hats look pretty cool!

Really?: You know, for a man who is supposed to be the villain, Antonio Salieri doesn’t seem like such a bad guy (see: “Synopsis”). Maybe I’m just a softie myself, but I had a bit of a hard time believing Salieri would hold a grudge as long as he does – especially near the end, when Mozart falls on hard times, has a family to support, and actually tells Salieri he considers him to be a friend.

Rating: Amadeus cleaned up at the Oscars for a good reason: it’s an intelligent, well-written, and beautifully filmed movie that’s filled with great music. Amadeus boasts a number of good performances, including Tom Hulce as the title character and Elizabeth Berridge as his wife, but F. Murray Abraham is superb as bitter old Salieri, a man with just enough musical talent to know he’s a mediocrity. Highly recommended. 10/10 stars.

Posted by Eli Schuster at 9:05 AM No comments: Links to this post