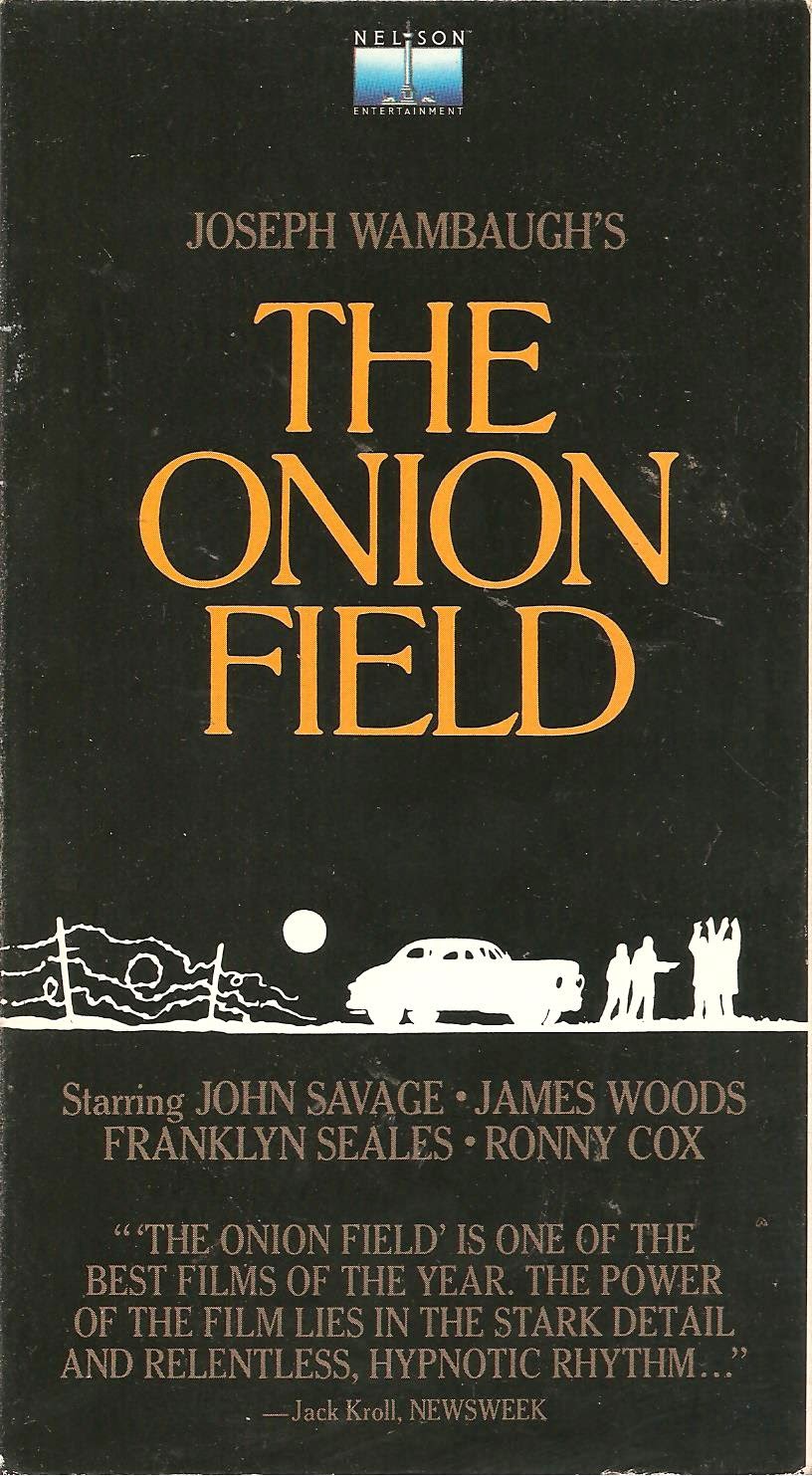 Blurb From the VHS Jacket: “A searing adaptation of Joseph Wambaugh’s chilling best-seller. The true story is about two Los Angeles cops who are kidnapped and murdered by two petty crooks One of the officers is murdered in a deserted onion field between Los Angeles and Bakersfield, California.”

What Did I Learn?: Apparently, if you kidnap somebody in the United States, the death penalty doesn’t apply until you kill your hostage. Hey, that’s good to know!

Rating: The Onion Field isn’t a fun movie by any stretch, but it’s a good one. The film is an indictment of both America’s revolving-door justice system, and the LAPD’s incredible insensitivity towards one of its own. Interestingly, the murder of Detective Campbell (Ted Danson) merely marks the end of the first act, as the rest of the film deals with Greg and Jimmy trying to stay alive in prison, and the surviving officer’s attempts to get on with his life in spite of some serious survivor’s guilt and post-traumatic stress disorder. Watch for Christopher Lloyd in a small, but memorable part as the jailhouse legal expert. 8.5/10 stars.

Posted by Eli Schuster at 8:10 PM No comments: Links to this post 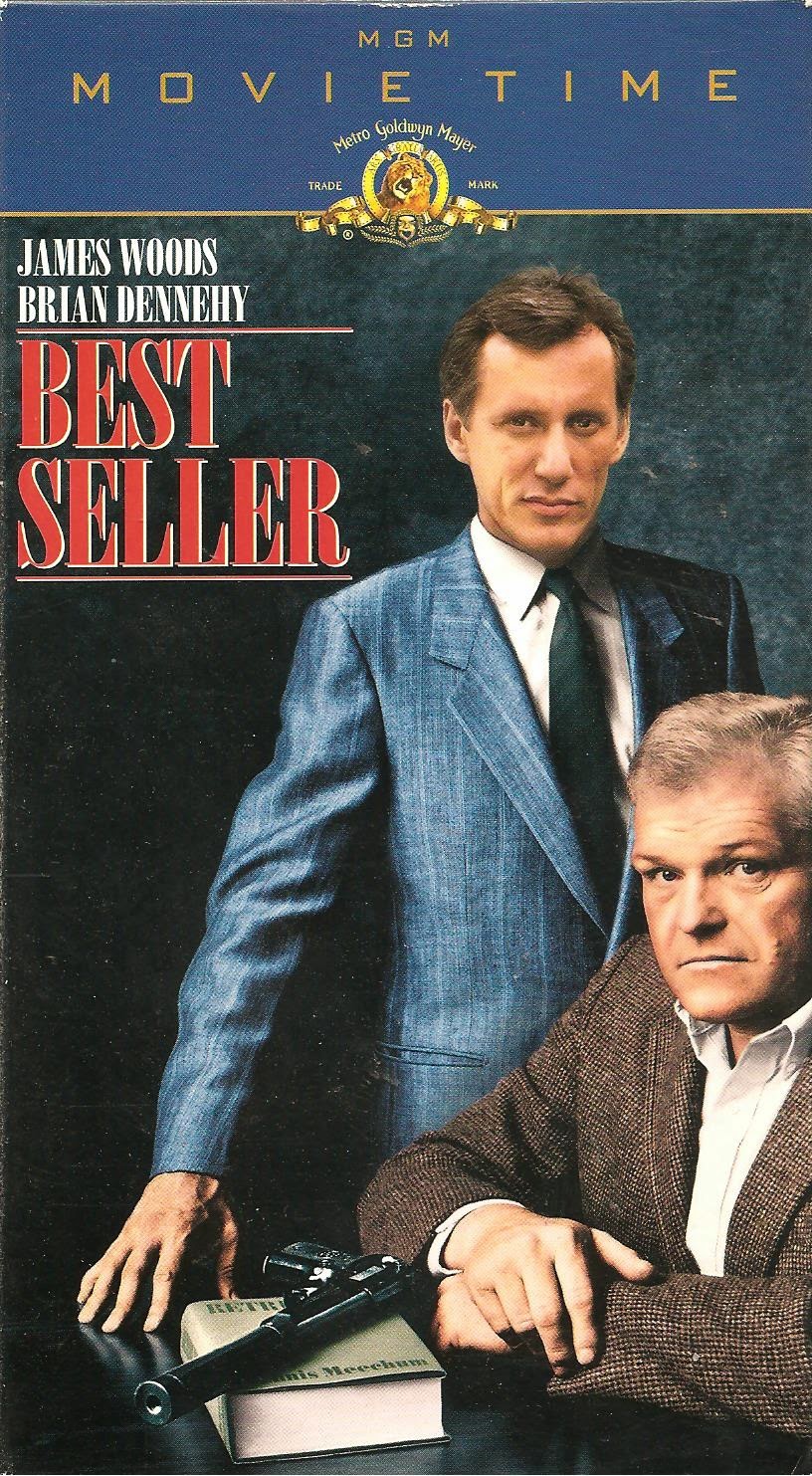 Blurb From the VHS Jacket: “James Woods (Nixon, Casino) and Brian Dennehy (Romeo and Juliet, Presumed Innocent) team up for an unlikely partnership as they face off against a death-dealing financier in this tense, gripping thriller that fascinates with its action, suspense and brutal honesty.”

What Did I Learn?: If you’re planning to write a tell-all book about working as a professional hitman for a powerful industrialist, you might not want to show up unannounced at one of his swanky cocktail parties and spill the beans.

You Might Like This Movie If: you appreciate a good best-seller.
Really?: 1) Hold on – why is Dennis doing undercover police work? He’s a best-selling author, for fuck’s sake!! He’s known across America as a cop who writes true-crime books. 2) See: “What Did I Learn?”

Rating: Best Seller is a long-forgotten, low-budget thriller that went straight to video (and the First Choice movie channel, where I first saw it) soon after its release. It’s a bit cheesy in places, but the story is compelling, and I liked both Woods’ performance (you’re never entirely sure if you should sympathize with Cleve or not, which makes him interesting) and the chemistry between him and Dennehy. Best Seller is a solid film. 8/10 stars.

Posted by Eli Schuster at 6:48 PM No comments: Links to this post 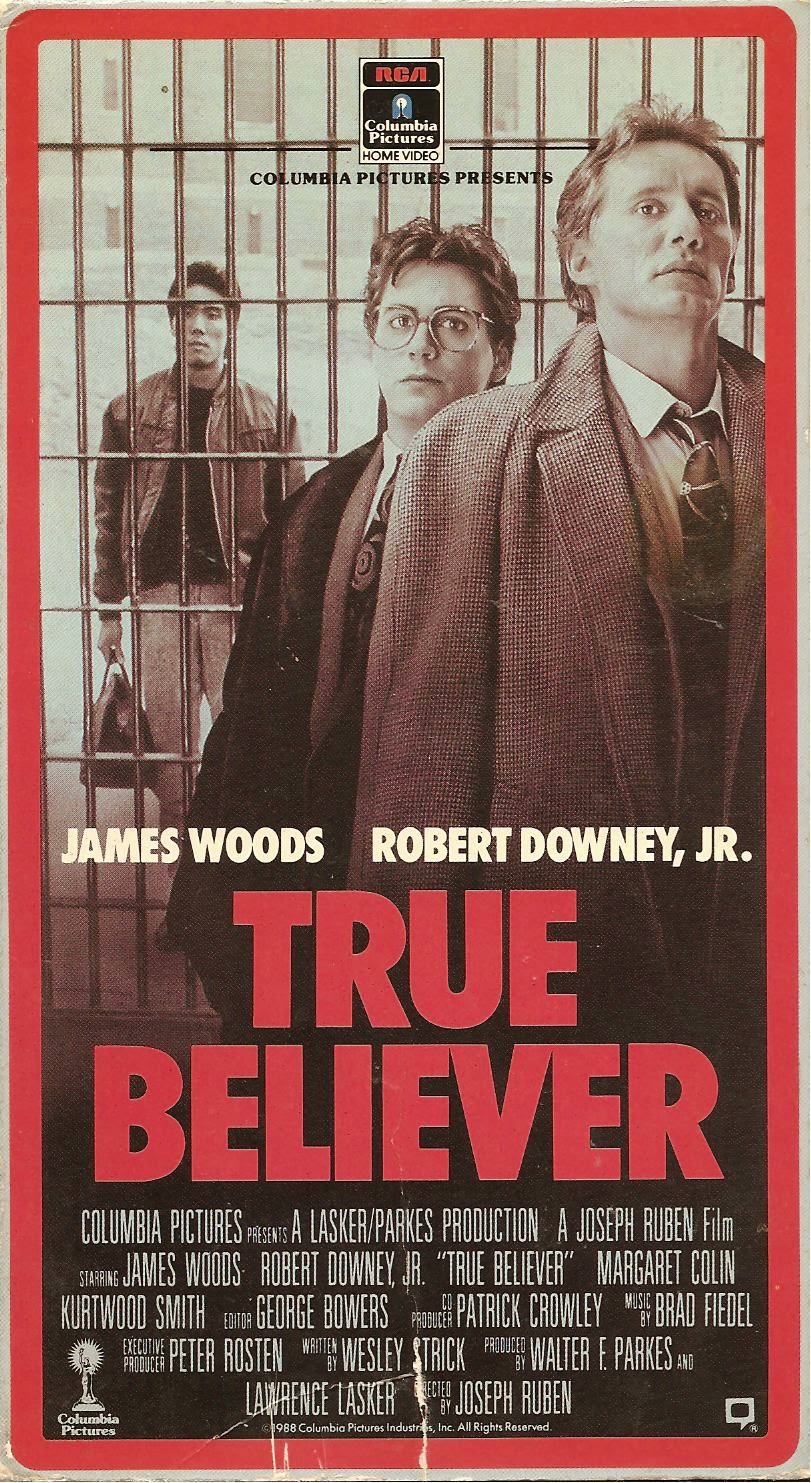 Synopsis: Scuzzy lawyer tries to get his client acquitted of a jailhouse murder by arguing he should never have been sent to the big house in the first place. Um… is that even remotely possible in the real world?

Blurb From the VHS Jacket: “The killing. The conviction. The cover-up. Now James Woods is about to go up against corruption and conspiracy at the highest levels of New York City law enforcement in the action-packed courtroom drama TRUE BELIEVER.”

What Did I Learn?: Neo-nazis can get awfully grumpy if you drop in them unannounced, and in the middle of the night.

You Might Like This Movie If: you're a true believer who is in search of the truth.
Really?: 1) See: “Synopsis.” 2) Hold on – the D.A. knows Shu Kai Kim is an innocent man, and that looking into the case could unravel a web of corruption, and yet he turns down a deal that would have avoided a potentially messy trial? 3) Why would the D.A. incriminate himself on the witness stand? And why the fuck would Dodd rest his case immediately after his testimony (damning as it is), when the case is quite complicated, they jury doesn’t know the full story?

Rating: True Believer is an enjoyable, if somewhat implausible courtroom drama. Woods is great, but Robert Downey Jr. is given very little to do (despite receiving second billing), and more-or-less disappears mid-way through the film. 6.5/10 stars. 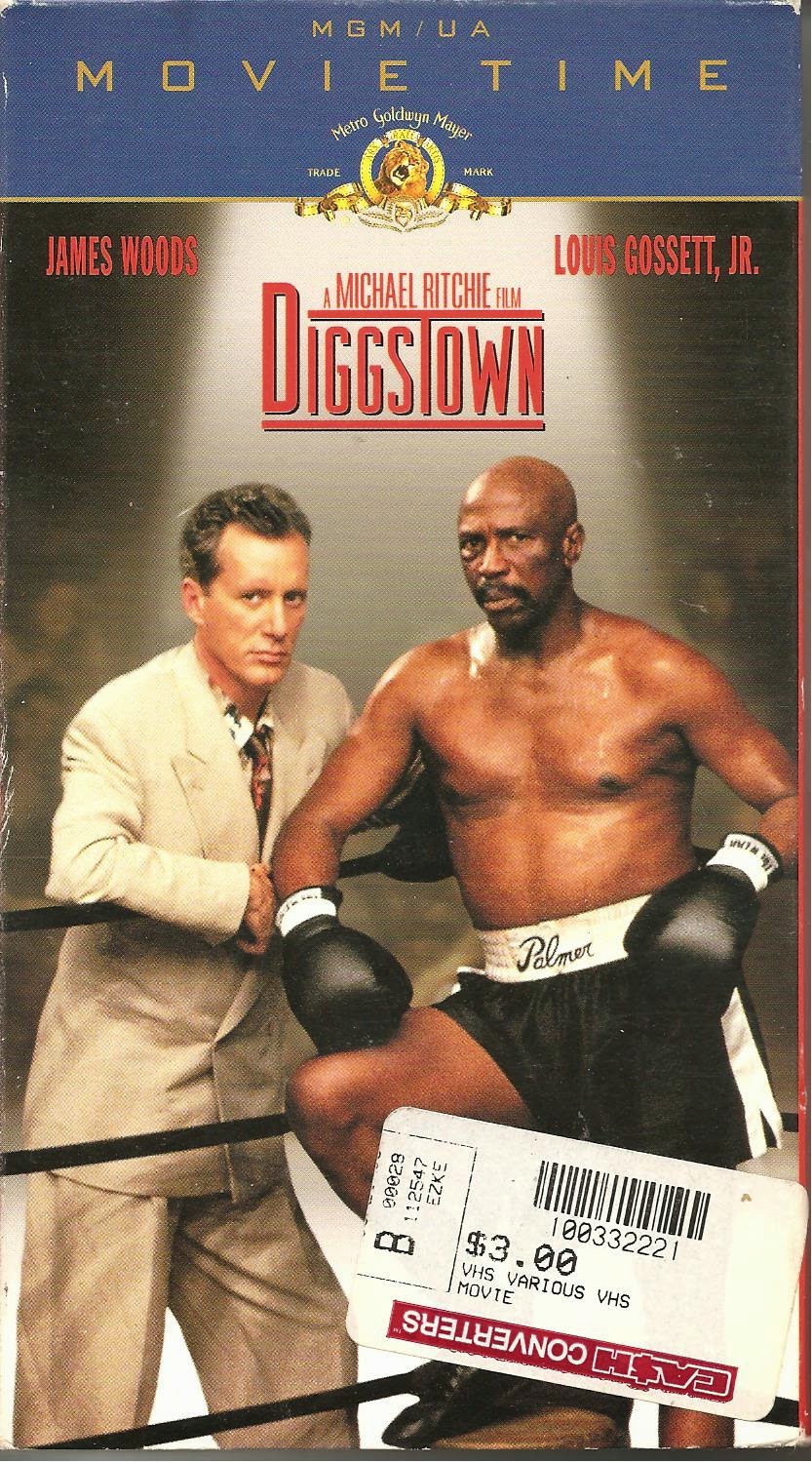 Blurb From the VHS Jacket: “The con is on, and so are the laughs in this two-fisted comedy packed ith surprises and ‘rock’em sock’em action’ (David Sheehan, KNBC). James Woods and Academy Award winner Louis Gossett, Jr. are a potent one-two punch as a pair of mismatched partners in for the scam of their lives.”

What Did I Learn?: A hustler has to get out of town as quick as he can, but a good con-man - he doesn't have to leave until he wants to.

You Might Like This Movie If: you've always wanted to clean Paul Shaffer's clock.
Really?: 1) Are Emily (Heather Graham) and Caine dating? This is left unclear. If they are, isn’t he WAY too old for her? 2) So, if Corsini has put up nearly all the money for this scam, does this mean he now owns the town? Are the citizen of Diggstown any better off with a sleazy Miami gangster in charge instead of Gillon (Bruce Dern)? 3) See: "Synopsis." I don't know...agreeing to fight ten tough guys sounds more like gambling than an actual con.

Rating: Woods and Gossett enjoy some fine, bickering chemistry in Diggstown, a well-written, and often-funny caper film with a clever twist ending. My only complaints are that a number of sub-plots (including the budding romance between Emily and Caine) are never developed, and Dern’s character is a little too cartoonishly evil to be believed. 8/10 stars. 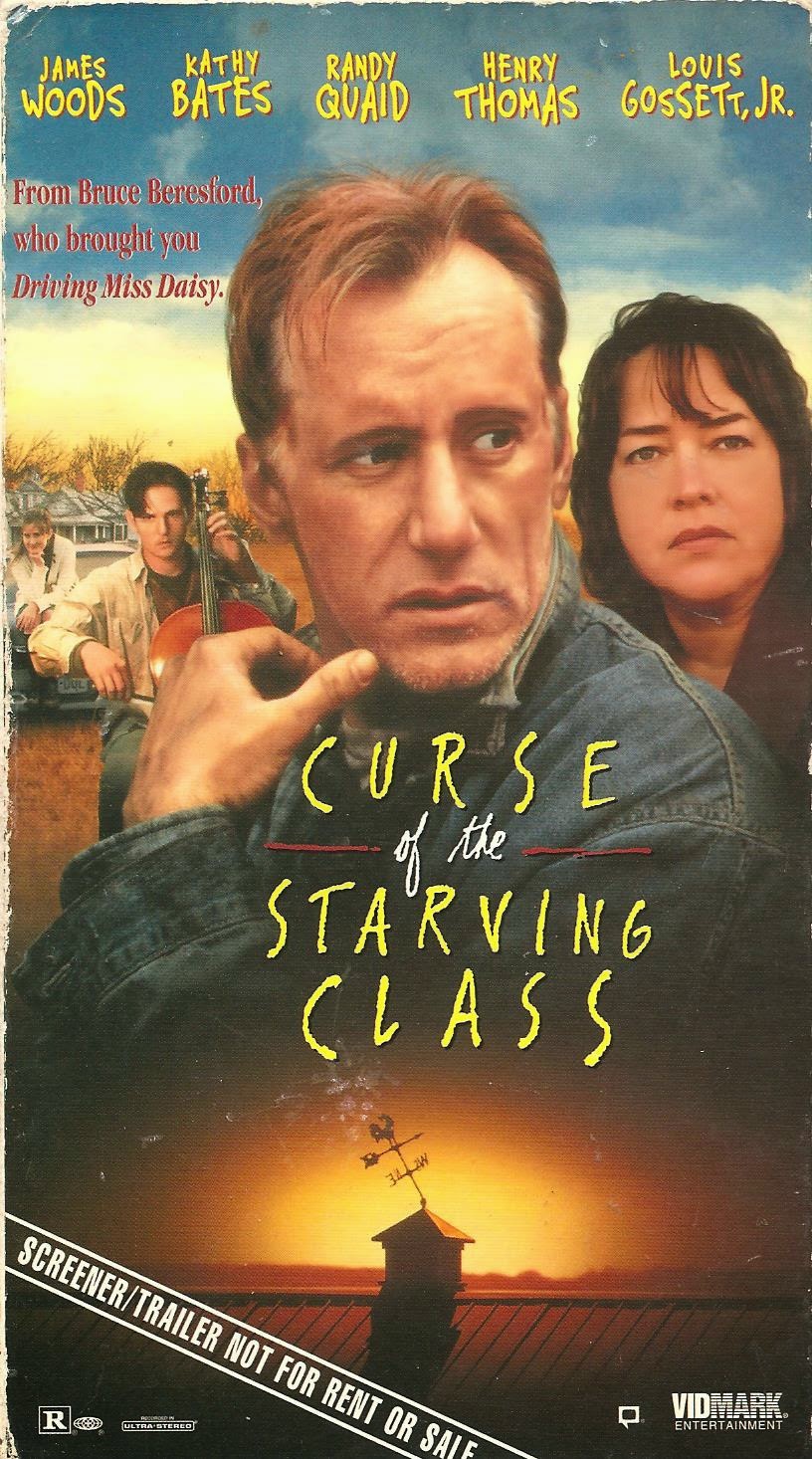 Synopsis: Ever wanted to watch 102 minutes of James Woods get drunk, break shit, throw artichokes and scream like a white trash lunatic? Nah, me neither…

Blurb From the VHS Jacket: “From Bruce Beresford, who brought you ‘Driving Miss Daisy,’ comes an outrageous blend of passion and humor, CURSE OF THE STARVING CLASS. It’s an eccentric story about life, love and one family’s struggle to make their dreams come true.”

What Did I Learn?: If your newborn baby goat has a tapeworm problem, it’s probably not a good idea to let it eat and sleep in your kitchen.

You Might Like This Movie If: Just like Wesley Tate (Woods) you know that you can feed your family with a bag of stolen artichokes.
Really?: See: “What Did I Learn?” (Seriously, who would do that? For fuck’s sake, a kitchen is the place where you prepare food!)

Rating: Hoo boy, I hate Curse of the Starving Class. Since it was derived from Sam Shepard’s acclaimed stage play, I can only assume that Beresford took some liberties when he wrote the screenplay, because it’s dreadful. None of the characters are even remotely likeable (that includes the kids, played by Henry Thomas and Kristin Fiorella, who are sullen and obnoxious), and I honestly didn’t give a shit about them – I stopped watching after an hour because Woods’ screaming tirades get old, fast. I cannot recommend this movie. 2/10 stars.

Would It Work For a Bad Movie Night?: Hardly – but take a drink every time Randy Quaid says something sleazy.