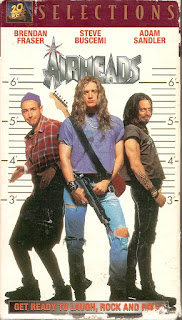 Synopsis: It’s basically Dog Day Afternoon meets This is Spinal Tap, with a parody of Die Hard thrown in for good measure.

Blurb From the VHS Jacket: “In this hilarious spoof of the music industry, three intelligence-challenged rock’n’rollers decide to take drastic action after their music continually falls on deaf ears.”

What Did I Learn?: Motorhead’s Lemmy would defeat God in a wrestling match because Lemmy is God.


Really?: 1) I had a hard time believing the cops would be so accommodating to our heroes, or that police snipers wouldn’t have simply shot them when they emerged from the building. 2) I realize Ian (Joe Montegna) and Suzzi (Nina Siemaszko) gradually warm up to Chazz, Rex and Pip (Brendan Fraser, Steve Buscemi and Adam Sandler), but wouldn’t they face some sort of accessory-after-the-fact charges for blatantly assisting them? 2) So, what was the point of that phone call from Beavis and Butthead?

Rating: Airheads starts out with a potentially-funny premise, and features a number of talented comedic actors (including two Ghostbusters – Ernie Hudson and Harold Ramis), but the script owes a lot more to the overcharged dopiness of Empire Records than the clever humour of This is Spinal Tap, and it's best described as loud, rather than funny. Michael Richards’ physical comedy doesn’t fit with the rest of the movie, and I was hoping to see a bit more interaction between Chazz and Ian (Joe Montegna), the cynical deejay. Overall, very mediocre. 5.5/10 stars.

The Worst Movies I reviewed in 2016 (less than 5 stars, in no particular order):

You may have noticed that I haven’t reviewed all that many movies in recent years. As I explained in November, I wanted to catch up on some popular television shows over the spring and summer, but that’s not the only reason I have slowed down. To be honest, it is sometimes difficult for me to maintain my passion for this blog. I reviewed most of my favourite movies years ago, and it’s tough to get excited about forgettable crap like Hot Stuff or Gang Related. Last January, I even neglected to compile my annual Best and Worst lists.

Death on the Nile

The Bridge at Remagen

The Bridge on the River Kwai

The Worst Movies I reviewed in 2015 (less than 5 stars, in no particular order):


Smokey and the Bandit II


Every Which Way But Loose


Heavy Traffic
Posted by Eli Schuster at 8:22 PM No comments: Links to this post