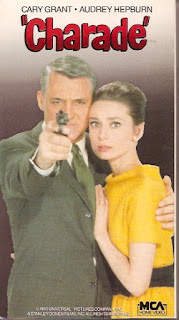 Walter Matthau Movie #2
Synopsis: Plucky heroine is chased by villain who looks like he couldn’t outrun a snapping turtle…oh, wait – that’s the Synopsis for Dead of Winter. Um… Cary Grant plays a suave and sophisticated urbanite who is mistaken for another man and must rescue a lovely lady from a gang of cutthroat…no, that’s North by Northwest. Ok, it’s 1963, and a wacky band of greedy, back-stabbing bastards tear a city apart looking for hidden treasure….no, that’s It’s a Mad, Mad, Mad World.
Blurb From the VHS Jacket: “Charade, in its own way, is one of the most radical and experimental films of the ‘60s.”
What Did I Learn?: Shakespeare never said: "When strangers do meet in far off lands, they should e'er long see each other again"
You Might Like This Movie If: You know it isn't easy to pull off a good charade.
Really?: 1) So, why does Grant’s character lie about being unable to speak a word of French, when he later reveals he has at least some command of the language? That doesn’t make much sense. 2) [Spoiler Alert!] So… Hamilton (Matthau) somehow manages to ice both Scobie (George Kennedy) and Tex (James Coburn), as well as Leopold (Ned Glass)? I’m not sure I believe that.
Rating: Charade is a charming, stylish, and occasionally funny thriller that features a great cast and some genuine suspense – we’re never entirely sure who’s side Grant’s character is on, or what his motivations might be until the very end. 8/10 stars.