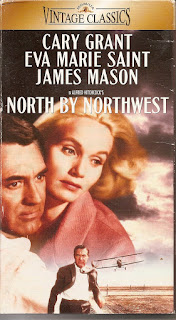 Synopsis: Did you ever want to see Don Draper dodge bullets, steal a truck, ruin an auction and become a fugitive from justice? This is your lucky day...

Blurb From the VHS Jacket: “Roger Thornhill (Cary Grant) is not a spy. And he’s certainly no murderer. Nevertheless, Thornhill’s a wanted man: enemy agents want him dead, the police want him arrested, and a cool, mysterious blonde (Eva Marie Saint) just plain wants him.”

What Did I Learn?: The ability to drink large quantities of alcohol is a useful skill; you never know when some thug might pour a pint of bourbon down your throat against your will and place you behind the wheel of a stolen car.


Really?: 1) Why didn’t the porter continue to page Mr. Kaplan after speaking with Thornhill? Come to think of it, why did the baddies seriously think they could smoke out a super-secret-agent by simply paging him? 2) Wait just a New York Minute.... how in the world could Thornhill escape from the UN after everybody saw him assassinate X? 3) I realize this movie was made in 1959, but I had an extremely hard time believing Thornhill could simply jump on a train to Chicago without a ticket even though the cops know he’s somewhere in Grand Central Station. Wouldn’t they simply lock down GCS? And what are the odds of him getting on the very same train as the villains, even though it was entirely a spur-of-the-moment decision?

Rating: It’s funny: North by Northwest was released over half a century ago, but it’s still fresh, and incredibly compelling. Cary Grant is at the top of his game in this film, and he shares some wonderful chemistry with EMS. Interestingly, North by Northwest heavily influenced the early James Bond movies, and there are a number of scenes that are eerily reminiscent of From Russia with Love. Highly recommended. 9/10 stars.