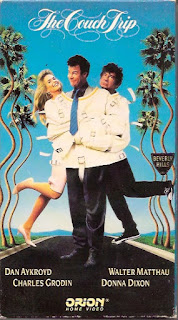 Walter Matthau Movie #4
Synopsis: Truth-telling, plain-spoken average Joe gets mistaken for a shrink, is given their very own radio advice show, and becomes a media sensat… hey, waitaminute – that’s basically Straight Talk, minus the cleavage!
Blurb From the VHS Jacket: “A COMEDY OF TRULY LOONY PROPORTIONS”
What Did I Learn?: 1) There is nothing that can be accomplished in a short time that cannot be accomplished just as well over a longer period. 2) Swans are not dangerous.
You Might Like This Movie If: You know that therapy involves a lot of hard work.
Really?: 1) I realize this movie was filmed a number of years before 9/11, but how in the world can Burns claim Baird’s airline ticket without showing some sort of identification?  2) So, Maitland heads to London, decides on a whim to check out a psychiatric conference, and somehow strikes up a conversation with the real Lawrence Baird? Gee….that’s a coinky-dink.  3) Um….how does Dr. Laura Rollins (Donna Dixon) feel about Burns? This isn’t ever resolved. I mean, she’s willing to help him bust out of a police van, but unwilling to vamoose to Mexico. And as a trained psychiatrist, wouldn’t she know he’s a fraud long before that phone call from Maitland and Baird? 4) I’m curious: what happened to Lopez? Burns seemed awfully concerned about his welfare before his big escape. Did Baird place him on a daily regime of thorazine after Burns fucked off?
Rating: The Couch Trip was played and re-played endlessly on First Choice at the end of the 1980s, so I saw it a number of times back in the day, and felt a strange nostalgia when I viewed it again for the first time in 30 years. The film is a highly-contrived (see “Really?”), and occasionally-funny ego trip for Aykroyd which starts out well, and eventually ends as a confused mess. The Couch Trip isn’t meant to be taken too seriously, so I can overlook the fact that no consequences ever arise from Burns dispensing bullshit therapy, but Aykroyd is incredibly smug, while Matthau and Dixon aren’t given much to do in their vaguely-defined roles. 6/10 stars.